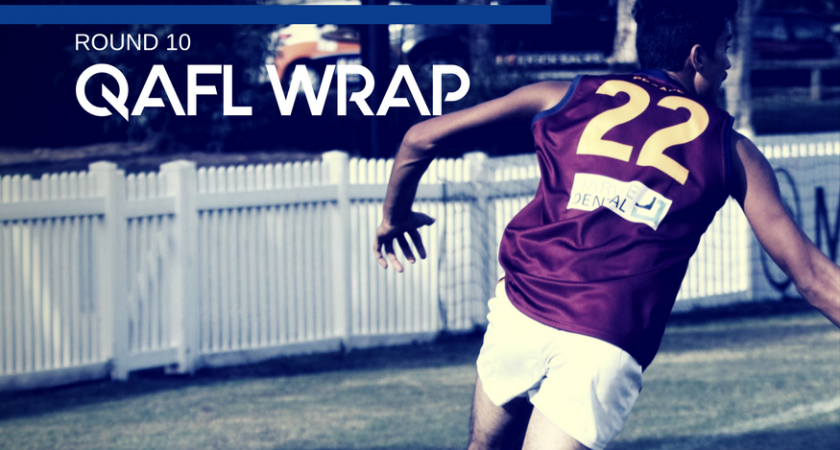 Morningside came from the clouds in the last quarter against Palm Beach Currumbin, kicking three goals in five minutes to win the tight contest. It’s an important win at this stage of the Panthers’ season, placing them on four wins with Mt Gravatt, the Western Magpies and Wilston Grange.

Kent Abbey rose to the occasion in the final minutes, kicking two of the Panthers last three goals. Illusive tall defender Ryley Buntain was also instrumental in the victory, intercepting down back and consistently clearing the ball. Half back Campbell Wearne was brilliant all day, winning the ball in tight and getting quick kicks out of defense.

For the Lions, silky midfielder Tyler Cornish provided some much-needed link up play through the middle, while also hitting the scoreboard with two majors. It seemed to be just one of those days for Palm Beach, whose inaccurate kicking (8.18), in the end led to their downfall.

Josh Woolley continued his impressive string of performances for the Lions and also took a massive hanger. Stay tuned for that one.

Welcome to my Charlie Pershouse

Western Magpies tall forward Charlie Pershouse been an interesting study this season, dominating in some games, while going missing in others. The nineteen-year-old Lions Academy prospect was the former on Saturday, using his blistering pace to impact up the ground, then get back and hit the scoreboard. The big Magpie’s performance netted him six goals.

“We don’t need him to be perfect and that’s the same with all our forwards. He puts a lot of pressure on himself and it’s good to see that he just takes the game on and like you say, get’s some reward for effort,” said Magpies coach Brydan Morgan, speaking after the game.

While the Magpies controlled the contest for most of the game, Mt Gravatt were ahead on the scoreboard at half time, and maintained their lead till midway through the third. The dam wall eventually broke and from the eighth minute of the third term, the Magpies kicked eight unanswered goals to finish off the game.

Magpies midfielders Drew Mitchell and Tom Ielasi were influential around the grounds, with ‘in and under’ support from Gareth Crawford. Jakob De Winter threatened down forward, but missed some opportunities, while Liam Dwyer also provided a forward target to kick to.

Jayden Crawley was impressive for the Vultures, taking some important big marks and attracting plenty of the footy. Joe Murphy put in another reliable performance and won his share under the packs. Too much was left to too few on the day and going forward the Vutures will need more contributors, particularly if they want to be around come finals time.

Bryce Retzlaff has claimed his place at the top of the QAFL goal scorer’s table with a six-goal haul for the Tigers against Broadbeach on Sunday. It’s panic stations for the rest of the league as opposition clubs now have a flying Retzlaff to contend with, as well as big Bazza.

Teams have been bringing their best to throw at the Tigers all season, but that Labrador train just keeps rolling on. It did so again against the Broadbeach Cats.

One of the questions around the game in the build up was if the Tigers defense would be able to handle the likes of big Cat Mitch Brewer, and the answer was a resounding ‘yes we can.’ In form defenders Jayden Young and Wayde Mills restricted the man mountain to just a single goal.

It all looked promising for Broadbeach early in the game, when they led the contest 31 to 21 at the first change. The Tigers soon gained the upper hand, however, and put the Cats to the sword, running out victors by 43 points.

It was set up as a close battle between two teams searching for wins hard to come by down the bottom end of the ladder. Surfers quickly put paid to that idea, coming out from the first siren and playing with frenetic pace and ferocious attack on the football.

Speedy is the only way to describe it; the young Surfers zipped across Sir Bruce Small Park, linking up with handball after handball and hunting in packs. Sean Atkinson was prolific, hitting targets inside fifty with damaging accuracy, while Paddy Rankin proved difficult to tackle and slotted three goals.

Surfers ran away with the game, winning by 66 points in an emphatic display.

Connor Stackelberg was one of few positives for Sandgate on the day, presenting hard and finishing up the game with two goals. Brendan Colch worked hard around the ground for the Hawks, providing some much needed composure.