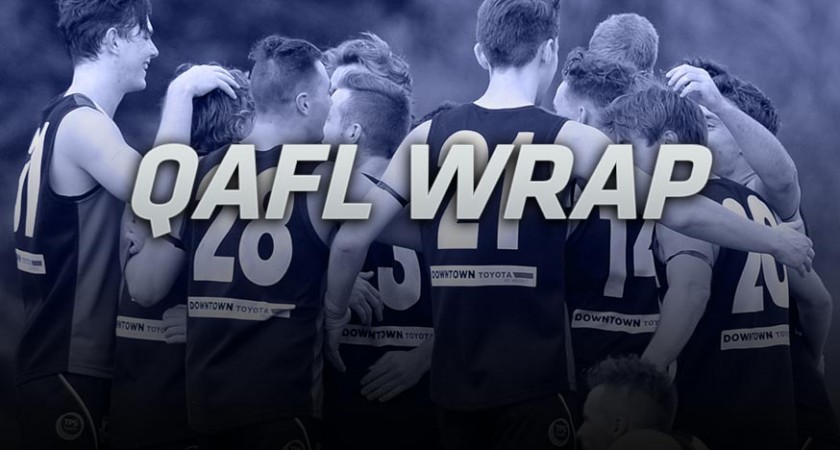 THE big three of the QAFL competition – Broadbeach, Morningside and Palm Beach Currumbin – warmed up for the run to the finals with big wins on Saturday.
Ladder leaders Broadbeach handed competition newcomers a near 100-point thumping, Morningside put a similar big gap on Mt Gravatt and Palm Beach Currumbin delivered a 50-point thumping to Labrador.
The only close game of the seventh round fixtures was at Sir Bruce Small Park where Surfers Paradise edged Wilston Grange by three points.
What the results did was to entrench Broadbeach, Morningside and Palm Beach in the top three and it now goes to the final two rounds to determine the pecking order for the finals.
Mt Gravatt, Sherwood, Maroochydore, premiers Surfers Paradise and Labrador will be left to fight over the top-six scraps.
Broadbeach put Maroochydore to the sword when the Sunshine Coast made its first ever trip to Subaru Oval on the Gold Coast.
The Roos limped home on the back of a 17.18 (120) to 4.2 (26) hiding dished out by a rapidly-firming premiership fancy.
It was all over at quarter-time when Broadbeach led 7.3 to 0.1. The margin increased at the next two breaks but to their credit, the Roos kept at it and were outscored by only 2.6 to two goals in the final stanza.
Cats coach Craig O’Brien was surprised by the size of the win because he had been watching Maroochy’s results of late and expected a danger game.
“They’ve been in pretty good form,” said O’Brien of Maroochydore.
“They pushed Morningside and they won last week so we worked this week on not taking it easy. We had to come out and consolidate from last week’s win (over PBC) and we did.
“In the first quarter we were very good.”
Importantly for the Cats they won again despite limited input from gun forward Jordan Moncrieff, who backed up the previous week’s haul of 1.2 with 1.4 on Saturday, with one out of bounds on the full.
But the Cats covered that with teenager Josh Gore kicking five and Clay Cameron three, all of Cameron’s coming in the third quarter.
The good thing is we’re finding a way to score without Jordan being our main goalkicker,” said O’Brien.
As the former Essendon, St Kilda and Sydney AFL player said, with Moncrieff, Cameron and Connor Nutting in attack, he has a ‘very dangerous’ offensive combination. As well, last year’s captain Matt Fowler, is still at the club.
Max Lower in the middle, Nutting and Gore up front and pocket Liam Nelson were outstanding the Broadbeach.
In the opposition camp, coach Andrew Cadzow was understandably disappointed but still found some positives.
“We’ve been getting better and better each week,” he said.
“Morningside, we challenged them; PBC we were competitive against and Sherwood were meant to belt us but we beat them.
“This is a young group so we had to have a flat spot.
“This looks horrible on the scoreboard but I’m happy our flat spot was today (and not later on).
“Basically we wiped the first half and in the second half we were competitive. My players would have learnt a lot of lessons today.”
Best for the Roos was Brisbane Lions Academy member Carter Michael, Josh Goval in the middle and ruckman Jacob Simpson.

PBC take the battle of the Coast big cats
PALM Beach Currumbin bounced back from their loss to Broadbeach with an emphatic second-half performance in their Coast derby against Labrador at Cooke-Murphy Oval on Saturday.
After a competitive first quarter, when the Tigers led by five points, the Lions warmed up to the task in windy conditions and went on to victory by 14.11 (95) to 6.9 (45).
The Lions outscored the Tigers by 12.8 to 3.6 after quarter-time, such was their dominance.
Ever consistent Tom Thynne and Zac Harrison stood out for PBC, who also had forward Mitch Johnson (three goals) as driving forces.
Victory was especially sweet for rugged on-baller Tyler Cornish who was playing in his 100th seniors game for PBC.
For Labrador quality ruckman Fraser Thurlow, Jaise Coleman and skipper Bryce Retzlaff were best.
Morningside would have been expecting a danger game when they ventured across Brisbane for a clash with Mt Gravatt at Dittmer Park.
Instead it was the Vultures who had to sit back and watch a star performance from ex-Brisbane Lion Matt Hammelmann, who booted eight goals in Morningside’s crushing 16.7 (103) to 3.6 (24) victory.
Mt Gravatt failed to register a goal after half-time, so complete was Morningside’s dominance.
Away from Hammelmann, best for the Panthers were star on-baller Matt Payne and defender Jim Cowlishaw.
Down on the Gold Coast, premiers Surfers Paradise kept their finals hopes alive with a nail-biting victory over Wilston Grange.
The Demons won by three points, 9.11 (65) to 9.8 (62) after the Gorillas grabbed a one-point lead early in the final quarter.
Gold Coast Suns Academy member Max Pescud was a star up front for the Demons, kicking six goals. Cameron Topping and Daniel Charlesworth were also good for the home side.
For the Grange, who are now staring a wooden spoon in the face, their best were Tahj Abberley, Will McKenzie and Sam Gribble.