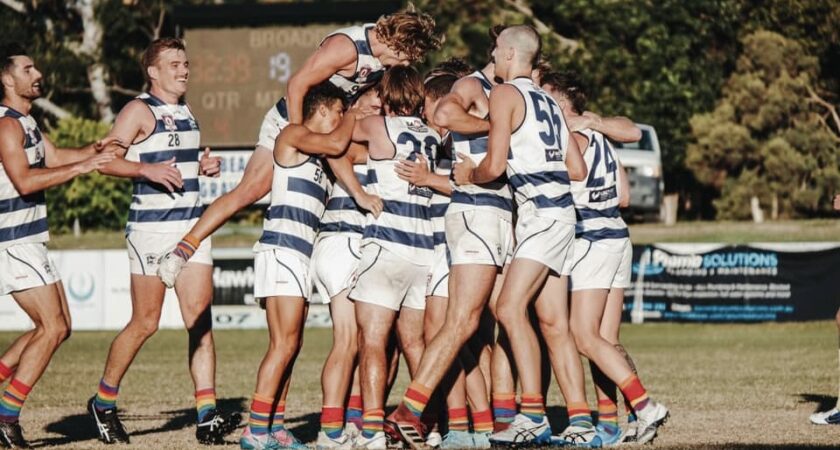 In Brief
After finishing in eighth position on the ladder in 2020 with one win and basically 11-goals ahead of Wilston Grange, Labrador has executed the perfect turn-around from near cellar-dwellers one season to minor premiers the next. This has been nothing short of exceptional and a testament to the club’s volunteers, players and coaches over a 12-month period.

Broadbeach has been a force over the past few seasons, finishing runners-up in two of the last three years. It has been one of the most exciting teams to watch all year and it is no surprise to see it thrive with the best attack and the best defense across the home and away season.

It had a three-game losing streak mid-season with losses to Labrador, Redland-Victoria Point and Sherwood, but responded in true style with 46 scoring shots and a 128-point win over Wilston Grange just before lock-down.

Minor premiers Labrador has won 63-percent of its quarters this year. Its best performing efforts spread across the middle quarters with a tendency to start slow and finish slow. It has won 20 of its 33 quarters in that stretch or 60-percent.

It comes as no surprise that with at least one strong quarter in each half that its goals across each half are evenly matched. Labrador has kicked 84 goals in the first half and 83 goals in the second half for a total of 167 goals; or 190 goals when its round 7 match against Palm Beach Currumbin.

Labrador has kicked 10 goals or more in a half on three occasions; twice in the first half (10) and once in the second half (15).

Including the Round 7 match, it averages 14 goals per game.

The Cats have been one of the most, if not, the most dominating team on the scoreboard across the season. They have won 17 quarters in the first half and 21 in the second. Their overall quarters won, 38, was ranked first in the home and away season ahead of Redland Victoria Point with 35.

The stats back up the Cats’ form where it has kicked 95 goals in the first half and 107 goals in the second half for a total of 202. This ranks them number one in the competition for goals scored during the home and away season, one ahead of Maroochydore.

Broadbeach has kicked 10 goals or more in a half on five occasions, doing so twice in the first half and three times in the second half. Its tally of 14 first half goals was its best for the year and that came in the 113-point win over Noosa in Round 9.

FORM GUIDE
Labrador has an average winning margin of 12-points against teams in the top 6 this season. It has a total winning margin of 67-points spread across five wins. It has played top 6 teams in seven of its 14 matches, but surprisingly, it hasn’t played Morningside at all. This match was scheduled for later in the season before COVID-19 struck.

It has lost two of its matches to top 6 teams for a combined total of 33 points, or an average of 16.5 points.

It has played three teams, twice and has split matches with two of them, including Broadbeach (-32 and + 20).

Against teams outside of the top 6, it has played 6 matches for a 5-1 record. It lost its only match by 40 points and has an average winning match of 65-points or 326 in total.

Broadbeach has an impressive winning record in most games across the season, especially against top six teams. It has won 3 and lost 2, with its two losses amounting to 34-points, or an average of 17 points. Its three wins have been at a total of 98 points or at an average of 33 points. The best of those wins came in the rematch of the 2020 decider when, after trailing by two goals at quarter-time, stormed home to win by 56-points on the road to Morningside at Jack Esplen Oval.

Broadbeach did not play against Maroochydore, the only top six team it didn’t play all season; and like with Labrador who has yet to play Morningside; results could pave the way for either one of the teams in this contest to have played all top six teams after next week.

Broadbeach played eight games against teams out of the top six for a total winning margin of 553-points or at an average of 79-points. This is the best winning average of any team in the top 6 against teams out of the top six in the competition. With a 7-1 record, its only loss came to Sherwood by 26-points, a team it had beaten by a 102-point margin earlier in the year. The 128-point turn-around between Broadbeach and Sherwood is the biggest between any two teams that have played each other twice all season.

Key players to watch
Labrador
Tom Simpson – a tremendous onballer who works extremely hard and wins plenty of the ball. He is the heart and soul of the engine room and can often be found at the bottom of the pack after a stoppage. He knows how to find a goal too, having kicked 15 from 13 games and has kicked two goals on five occasions.
Bryce Rezlaff – has presented well as a key forward this year and provided a strong target. With 27 goals from 9 games, he is tough to beat. He has kicked goals in every match and has kicked multiples on seven occasions. He missed the last match against Broadbeach, he will want to make up for that in this game.
Jayden Young – ever-reliable in the backline, he is strong, tough to beat and wins most of his one-on-one contest. He probably doesn’t get the credit he deserves, but his team mates and coaches value his worth.

Broadbeach
Jordan Moncrieff – he led the competition during the home and away season with 55 goals including 19 goals in consecutive weeks against Wilston Grange and Mt Gravatt (35-percent of his goals coming across those two games). After kicking four goals in the opening hit-out against Labrador, he was held to one in the second meeting and was completely shut out of the game. His last game had him produce six against PBC.
Finn Brown – a member of the Gold Coast Academy and with VFL experience to his name, he is a handy half forward that showcases plenty of run and carry with the ball. With lots of courage and confidence, back him in to do something special if the game is close.
Sam Jasper – the Robin to the team’s Batman (Moncrieff), he has 27 goals to his name this season with multiple goals in six of his 13 matches for the season. He is a big-game player and has three goals from two matches against Labrador.

Verdict
This is going to be one tough match to predict. I think if you love a good football story, minor premiers Labrador go on to win and advance through to the Grand Final, simply because of where it has come from. Broadbeach has been a power-house team over the past few years with a dynamic forward line and some incredible midfielders.

IF Labrador can keep the scoring to a minimum and take the run out of Broadbeach, and ultimately do what it did in the last meeting and force Moncrieff up the ground, it will play a key element in winning the game. Labrador has been challenged the most this season and it is probably just match ready in terms of more experience against quality teams.

Catch this game on the live-stream – https://www.aflq.com.au/qafl-live/