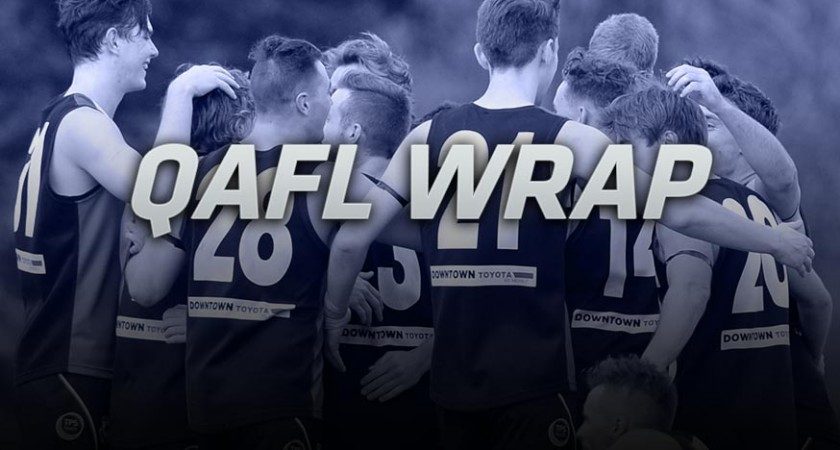 BROADBEACH are poised to end a QAFL premiership drought that stretches back to 1996 after thumping arch rivals Morningside at Subaru Oval on Saturday.
The red-hot Cats took the battle of the two previously unbeaten sides in emphatic fashion, scoring by 13.16 (94) to 6.8 (44) and firming to outright favouritism for their first flag in 34 years and only the third in the club’s 49-year history.
That sort of stuff, though, remains merely a dream and coach Craig O’Brien has thoughts only on their preliminary final fixture against either Sherwood or Maroochydore in a fortnight’s time.
On Saturday the Cats dictated terms from the opening bounce and only some inaccuracy in attack – they kicked 1.7 to 0.0 in the first term – kept the Panthers in the game.
From the outset the Cats were first to the ball as they began to pick apart the visitors much-vaunted clearance previous domination.
It did not hep that the Panthers went in without one of their midfield generals in Jack Rolls (hamstring), and when dual Grogan Medallist Matt Payne left the field with a similar injury the visitors were always going to struggle.
A final statistic of 29 scoring shots to 14, keeping in mind Morningside finished the game with 4.2, suggests that the Panthers do not play big grounds well.
But if they make it to the grand final, to be played at smallish Leyshon Park after a home preliminary final at Jack Esplen Oval, things could be decidedly different.
Our big boys are going to be better on a small ground.
“We have done a lot of work on stoppages,” said O’Brien of the Cats’ ability to outgun the Panthers in this key area of the game.
“People forget we’re a very good stoppage team although Morningside are the best in the comp and they have a really good forward (Matt Hammelmann).
“And what we did was to share the load in the forward line.”
Jordan Moncrieff kicked only 2.4 but up stepped Clay Cameron and Connor Nutting (three goals each) and Jackson Fisher with two.
With big-bodied Victorian recruits Max Lower and Brad Lowe leading the way the Cats shut down the Panther runners, strongly supported by Brandon Chadwick, Blake Erickson and Tyrone Armitage.
O’Brien said flashy Kwaby Boakye was his pick as best for the home side with his speed, aggression and disposal skills a highlight.
Panther boss Watts knew early on that it was going to be a long drive back up the M1 that afternoon.
He sensed his players were not fully charged for the battle and put that down to having two solid games and three weeks of solid training.
“I think it was on the back of that because on Thursday night you could feel they were a little bit flat and their performance today showed that.
“The opposition were very, very good but we knew pretty early on our energy levels were low.”
Watts conceded Broadbeach’s poor kicking in the first quarter kept his side in the game ‘a bit’.
“Broadbeach were cleaner around the ball and when you’re on top in that area they sort of all run on top of the ground, they overlap run and they use their spare bloke really well.
“We struggled to get any flow. In the first quarter we seemed to be hemmed in and couldn’t get out.”
“They (the Cats) set up well behind the ball and we couldn’t get some some uncontested marks to hold on to the ball.”
A worrying sign for Morningside was Payne’s hamstring twinge although Watts expects his star to be right after a week’s rest.
Henry Joyce in the middle, Lachlan Russ on-ball, defender Ben Kethro on Moncrieff and veteran Eddie Mallan were best for the Panthers.
Ex-Brisbane AFL player Hammelmann finished on top in the race for the Ray Hughson Medal with 34 goals, ahead of Sherwood’s Liam Dawson (28) and Jordan Moncrieff on 27.

Maroochydore in the finals, premiers Surfers are out

THE Surfers Paradise quest to defend their 2019 flag started badly in the opening round against PBC when they lost 45.8 (38) to 12.9 (81) at Sir Bruce Small Park.
After that the Demons never got going and a disappointing, frustrating season ended with only two wins to their name.
The Demons had the second worst points-for total of 619 for the season. That’s a per-game average of a tick over 52.
The fate of the Demons was sealed by an emerging Maroochydore side that took a 15.4 (94) to 8.9 (57) victory back home to the Sunshine Coast.
Maroochydore now play in the QAFL finals in their first season in the competition and are up against Sherwood at McCarthy Homes Oval next weekend in an elimination final between fourth and fifth.
The Roos jumped the 2019 champions with a seven-goal first quarter and they buried their hosts with another seven goals to nothing third term.
Jacob Simpson, Josh Govan, Carter Michael and Lochie Laing were best for Maroochydore while for the Demons ever consistent Jack Prestegar, Nick Harrison and Daniel Charlesworth were best as their side now heads to mothballs.
Down at Salk Oval Palm Beach Currumbin set up a finals rematch against Mt Gravatt with a win by 15.12 (102) to 7.12 (54).
The same two sides go around at the same venue in a knockout final next weekend and it will take a decided lift in form by the Vultures to stay alive in the race for the title.
After a hiding from Morningside the previous weekend the Lions surged back and were led by gifted Max Spencer, usually a defender, who kicked five goals.
Jamison Shea kicked four and big Brayden Crossley booted three.
For Mt Gravatt Daniel Daye, Joel Leahy and Jonah Licht were strong contributors.
At Cooke-Murphy Oval Sherwood cemented fourth spot for the finals after beating Labrador by 11.18 (84) to 10.6 (66).
A final tally of 29 scoring shots to 16 from the Tigers told the story because the Magpies started with a burst of 6.8 to 2.0.
After that the Tigers battled on bravely but the start they conceded proved to be so vital in the end.
Errin Wasley-Black continued his late season form surge to be best for Sherwood, along with Luca Winton and Bruce Reville.
For Labrador Tom Miller, Alex McKay and Rhys Nicholls head into the off-season with match awards.