QAFL Round 7 Preview and Teams 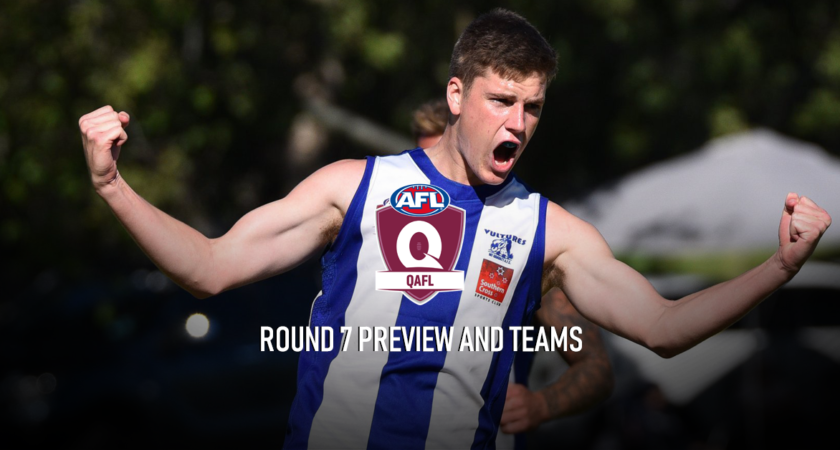 Broadbeach have made the tough call by dropping dual best and fairest Ryan Pantic back to the reserves for their trip to Morningside on Saturday.

The non-stop midfielder lost his place in the top side for the clash at Jack Esplen Oval as the Cats search for ways to reinvigorate Pantic, who has battled to find touch since rupturing his spleen in a finals match against Morningside last year.

“Ryan is someone who is giving us terrific effort but lacking some polish at the moment,” said Broadbeach coach Beau Zorko.

“He did have a very interrupted pre-season, obviously awaiting medical clearances, so he was behind the eight ball and no doubt that has affected his performance.

“But we know he is a classy player and we would not expect this to be a long-term thing. We want Ryan to get back some touch and come straight back in.”

Pantic is among four changes made to the Broadbeach side that beat Labrador last round.

Morningside, good winners last round over Sandgate, made two changes.

Defender Daniel Frame and Lachlan Dignan are in for Aaron Robertson and Jack Cowan.

This is a match-up between sides that finished second and third last year and who are currently in the top four.

Morningside are fourth after two wins while the Cats sit third with three wins but with a percentage that could come back to haunt them in the latter part of the season.

The Cats percentage is 92.56, the worst of those teams currently in the top six. Does this concern Zorko: Not at all, he says.

“There are two ways you can look at it. One is if you win more games than anyone else in the comp you’ll finish where you want to,” he said.

“The second I want the club to be in a position where we don’t have to worry about percentage. The more ‘Ws’ you get the better.”

Panthers coach Clint Watts is expecting a close game befitting the two clubs’ positions on standings, although he believes the Cats have a slight advantage in form.

“They’re a good team and probably going a bit better than we are right now,” said Watts.

It will be a special day at Esplen Oval to help raise awareness of a horrid infection known as sepsis, which has struck down Tayla Egan, daughter of former premiership star Paul Egan.

Now 16, Tayla first fell ill as a 14-year-old when she contracted influenza, which then turned into pneumonia, then sepsis.

Tayla subsequently lost half of her left leg, a third of her right foot and she underwent open-heart surgery.

“This is all about raising awareness of sepsis,” said Paul.

He will be talking to both Morningside and Broadbeach players pre-match and Taylor will be given the honour of tossing the coin before the seniors.

The Western Magpies will throw two rookies in at the deep end when they trek down the M1 for a challenge against premiers Palm Beach Currumbin on Saturday.

Struck by a run of injuries and player unavailability, the Magpies have been forced into making four changes to their side despite having had last weekend’s bye.

Teenagers Cody Scott and Samson Ryan are set for their seniors debut at the Salk Oval cauldron in what shapes as a true baptism of fire.

Magpies coach Brydan Morgan said the club could do nothing about the rush of injuries and unavailability that has cost them ex-Lions player Ryan Harwood, Claye Beams, captain David Lewis and deputy captains Luke Mitchell and Riley Easton.

“Cody is a 17-year-old midfielder who had some seniors time pre-season and Samson is originally from Toowoomba who has been in the Lions Academy squad,” said Morgan.

“I’m really happy for the likes of Cody. He is a Magpies junior who has not been involved in any of the talent pathways.

“Samson is a ruckman-forward who has gone through the talent pathway and is potentially looking to be drafted.

“Yes, it is a big ask for them to debut against the premiers but at the end of the day you have to have 22 players, so we’re looking forward to the challenge of playing the best in the competition at the moment.”

Last weekend PBC thrashed Surfers Paradise to become the only unbeaten side in the premiership race and the good news for them is that a number of players injured against the Demons have all come up well this week.

Ruckman Jon Croad, midfield star Jesse Derrick and defender Liam McNeven were all named in a Lions side that has two changes.

Returning from a hamstring strain is captain Steve Thynne and flanker John Macansh although handy forward Reyne Harris is out with an achilles issue.

Despite the problems the Magpies have, PBC coach Jess Sinclair expects nothing more than a battle royal.

“They’re a good side and they’ve had a week off,” said Sinclair.

“They have big bodies around the footy so if we don’t win it at the coalface then we’ll be in trouble.”

The son of former Windsor-Zillmere strongman Andrew Martyn has been named to make his QAFL seniors debut with Wilston Grange against Labrador at Hickey Park on Saturday.

“Will has been called up and so have Campbell Luhrs, Brad Tyrrell and Jake Gaw for their first seniors games,” said coach Barry O’Brien.

They are in after the Gorillas lost Daniel Henderson and Blake Nelis, who are both back at NEAFL club Aspley. A third Aspley player, Jack Lipscombe, is out injured, although Aspley-listed Sudanese Jimmy Aganas is available again.

It should be a big occasion for Wilston Grange, who are staging a gala function to launch their Hall of Fame on Friday night when several legends are to be honoured.

Labrador, who were disappointing last round against Broadbeach, have three changes.

Coach Liam Burke said both Baxter and Graham deserved their elevation after good form in the seconds.

This is a clutch match for Labrador, who have won only once this year and could be in trouble unless they start winning with two-thirds of the season to come.

“A third of the way through the season and with only the one win to their credit it is getting close to crunch time for the Tigers.

“We definitely want to stay in touch with the top five, but how close the ladder is can be seen in that we’re only one win away from fourth,” said Burke.

“It’ll give us confidence that if we can get it right then anything can happen at the end of the year.”

The Grange sit fifth with two wins and two losses and O’Brien knows victory would be a significant boost to the club.

A Labrador loss, though, would leave the Tigers with a big hole to climb out of from their current status of eighth on the ladder. 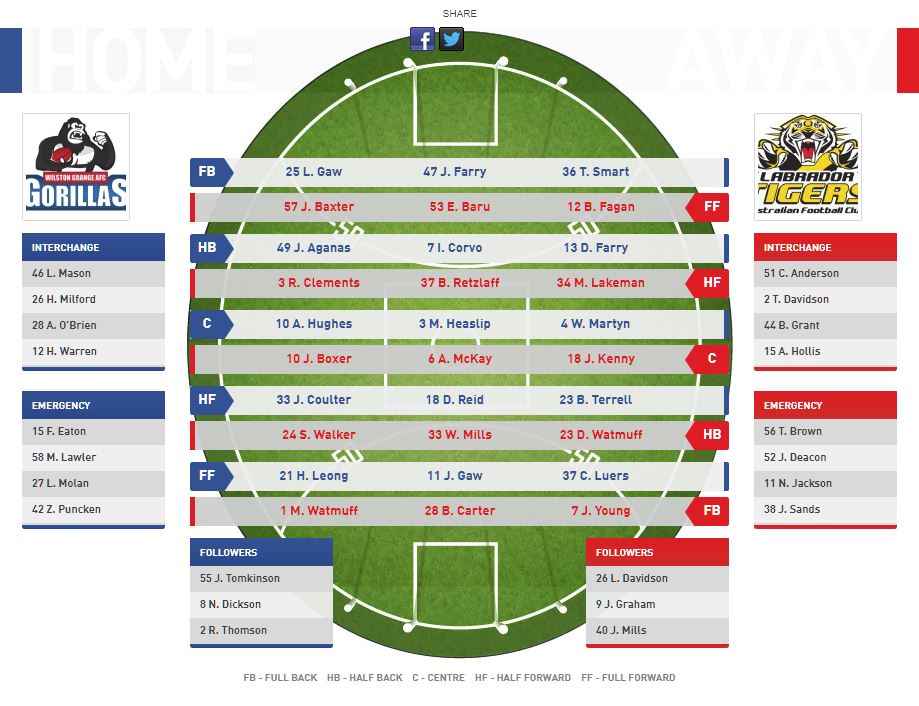 Sandgate coach Jarad Marsh expects an angry Surfers Paradise outfit to turn up for their clash at Lemke Road Oval on Saturday.

But that is exactly what Marsh is used to – opposition sides looking to turn fortunes around after poor performances the weekend before.

“Will we get angry Demons? I see us in a similar position each week,” said Marsh as he searches for the first win of season 2019 for his Hawks.

“We just want to play the way we want to and be competitive.

“We’re still in a heavy learning curve and I want to improve our contested ball after last week (when the Hawks were crushed by Morningside).”

The Hawks have three changes, including the loss of Rising Star Award nominee Lochlan Harrop who has state under-16 duties.

They get Aspley-listed Luke Bradford this weekend and handed a debut to small forward Gavin Greenoff.

Surfers, on the other hand, have six changes, all of them forced.

A run of injuries and the call-up by Southport of 2013 Grogan Medallist Haydn Kiel, have opened the door for Surfers to give new faces a crack at seniors football.

A new face is Gage Goldfinch, twin brother of Trent Goldfinch and son of Demons legend David, who made his debut as a 27-year-old a month ago.

An interesting point was raised during the week, that of whether Surfers have relied on their Southport-listed players too much.

Coach Brad Moore Surfers says he can understand an outsider’s perception that they do, especially after the efforts of players like Dylan Mutu, Kiel, Jack Mentha and Charlie Ford.

“It could be seen that way but we like to think we don’t (rely on the Sharks),” said Moore.

“There is a case to argue against but it’s up to us to prove otherwise.”