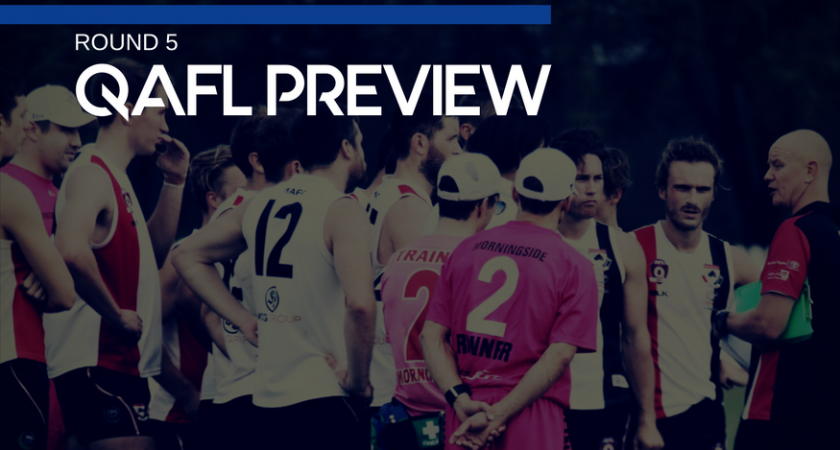 Match of the Round

Surfers’ forward powerhouse Daniel Green announced his 2017 QAFL arrival with a bang against the Panthers. Green makes the Demons walk taller when he’s on the ground and gives them a target in the front half, his experience also helps with so many younger players around him. 2016’s leading goal kicker was as hungry as ever against Morningside and will be critical again this week against Wilston Grange.

Round four Syd Guildford nominee Luke Shreeve put together one of the most dominant performances of an individual player this season against the Gorillas. The explosive Cats on-baller will be important again this week, as Broadbeach come up against the Panthers, who’ll have the home ground advantage.

Labrador backman Jayden Young is moving along nicely, having put together four definitive performances so far this year. Young reads the play beautifully, hits targets with his long kicking and each week impresses with his composure. Mt Gravatt will need to work hard if they want to get anything past this bloke.

Sandgate tall utility Isaac Corvo is teetering on the edge of a match winning solo effort. Corvo is strong in the contest, agile and has a raking kick when it comes off. Around the ground the young man with the moustache is also great in the air, so has the ability to play in almost any position. The Corvo riddle was highlighted by one play in particular on the weekend against the Vultures, when he took a huge speccy then turned the ball over with a pass that resulted in a goal to the opposition. When Isaac manages a complete performance it’s going to be scary. Hawks coach ‘Bomber’ Adams will be hoping it’s this week against the Lions.

Palm Beach go into the game against Sandgate as heavy favorites, particularly considering they should be refreshed after the bye. Josh Woolley, Jesse Derrick, and Jason Burge are all in form and pose a challenge for the Hawk’s coaching staff.

Morningside tall defender Ryley Buntain looks set to cross paths with Southport aligned tall forward Josh Baxter, in one of the round’s most critical matchups. Given Baxter kicked three in his first QAFL outing last week, to go with his 82 from last year, he’s an important inclusion for the Cats ahead of their clash with the Panthers. While the two talls may not be direct opponents, Buntain likes to intercept mark and create opportunities from half back. Buntain will need to be wary of Baxter, as the damaging tall forward’s record speaks for itself.

The Morningside and Broadbeach game looks set to be a ripper with the Panthers seething after a close loss to Surfers Paradise and the Cats aiming to prove their victory over the Gorillas was not an anomaly. Expect Morningside to come out with vigor, trying to avoid a 1-4 start.

When Surfers Paradise take on Wilston Grange in round five’s match of the round, they go in as the underdog. The Demons proved last week against Morningside however, that underestimating them is a big mistake. Just like coach Brad Moore promised during the pre-season, Surfers are fast, they take the game on at all opportunity and have troubled sides at stages with their quick ball movement.

It’s been a mixed bag so far this season for the Gorillas, they’ve had an exceptional close win over the Western Magpies, but suffered losses to Morningside and Broadbeach. If the Gorillas can get back to doing what they do best, winning the ball at the contest, they’ll be really hard for the young Surfers to stop.

The Demons found themselves on top in a one sided affair last time they played the Gorillas, winning their round 16 clash 114 to 38.

The Vultures challenged Labrador at certain points during their last contest but the Tigers were too strong in the end and ran away with the game 98 to 58.

The scoreboard at the end of the match the last time read 45 Sandgate, 123 Palm Beach Currumbin. The proud Hawks will no doubt be aiming for a more even scoreline this time around.

It was a significant victory for the Panthers in their most recent encounter with the Cats. Morningside ended up winning by a solid 58-point margin.

The Western Magpies have the bye this weekend and while senior coach Brydan Morgan will be enjoying a well-earned rest, he’ll also be keeping a close eye on proceedings. The Magpies went down to Labrador last week by 40 points, but according to Morgan there were a few positives to come out of the game.

“We’re a young side, so it was good for them to be really competitive against such an experienced side in Labrador and know that it’s going to take four quarters but they’re around the mark,” said Morgan.

According to Morgan, Morningside verses Broadbeach looks like a really interesting matchup, that will tell the rest of the competition a lot about where these sides fit in the QAFL.

“I just think it’s a big challenge for both sides,” said Morgan.

“I think Broadbeach will be very keen to get back to back wins.”

Mt Gravatt come up against the undefeated Labrador, but will take some confidence into the game after a big win over Sandgate.

“(It was a) Pretty big scoreline last week in wet conditions, so they’ve obviously progressed a bit since we had them in round one,” said Morgan.

“It’ll be a good challenge for Mt Gravatt.”

The Tigers have been in great form so far this season, not loosing a game and beating the competition’s best challengers. Brydan thinks it’s a combination of things that have contributed to their success.

“I just think they’ve got a really good blend of experience in every area of the ground,” said Morgan.

“That’s always challenging, so, they can hold on when the momentum’s not going their way and (they’re) pretty efficient.”

“You have to really be on your game, I think, pretty much for four quarters to beat Labrador.”

At Bendigo Bank Oval, Grange are set to do battle against a Surfers Paradise side that come into the match with some momentum. While Morgan thinks that Grange go in as favorites, the coach reckons it’s a winnable game for the Demons.

“That’s another one that’s really interesting,” said the Magpies coach.

“It could go either way, I think Surfers with their tails in the air and nothing to loose and a lot of confidence will be really tough to beat.“

Still winless after four rounds, the Hawks will be eager to get on the board this week, but will find it difficult against one of the competition’s titans, Palm Beach Currumbin.

The Magpies coach, however, was confident that Sandgate has what it takes to trouble sides this year. Morgan recalled their round two encounter and noted their competitiveness while also conceding the Hawks ‘had the better’ of them in the third quarter.

“I think they’re just a little bit unlucky with injury so far this year as well Sandgate, they haven’t seemed to be able to put their best team on the paddock,” said Morgan.