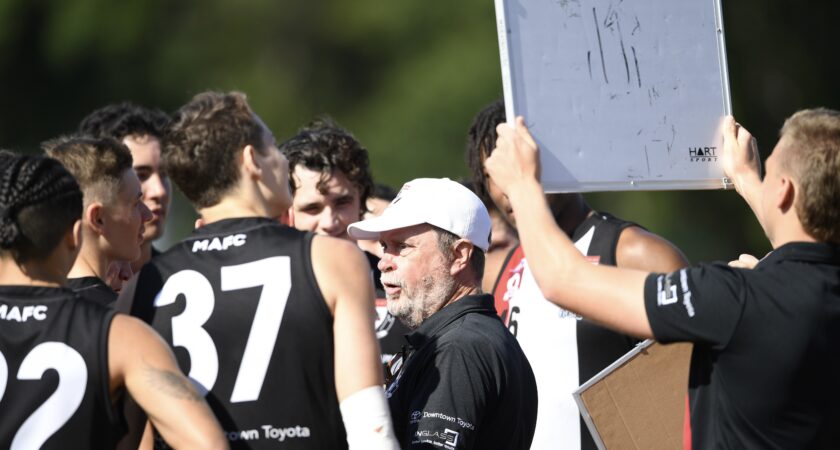 IN BRIEF
One of the great tragedies of the Reserves home and away season is that COVID-19 denied these two outstanding teams a meeting.

Fans had to wait until the second week of the finals before the top two heavyweights of the competition went toe-to-toe and it delivered beyond the wildest expectations with Morningside saluting victory with a point after the siren; and on foreign soil.

Labrador had failed to drop a game during the home and away season after a simply flawless year across all of their matches. There has been a strong, united front at the club right across the year and it is of no surprise that all three teams made it to at least the Preliminary Final stage of the competition.

Morningside continue to impress with their consistency and talented crop of players, many of whom have been squeezed out of the Senior team and ultimately added more strength to this Reserves line-up.

The Panthers have been clearly the second best team across the competition right through the year and arguably proved to be the best team when they won the semi-final clash against the Tigers.

Morningside has split their half results, winning 20 quarters in the first half and likewise in the second. If not for a barrage of goals in the second half against a match with Noosa, it could have equally split its goals across each of the halves too.

The Panthers haven’t needed to be a high-scoring team this year due to its strong defense, but they had kicked 100 points or more on two occasions.

Their record against the top six is impressive with a 5-2 win to loss ration. They have an average winning margin of 25 points (124 in total) and average losing margin of just five points; going down to Broadbeach and Palm Beach Currumbin by a kick or less.

Morningside tasted victory seven times against teams out of the top six with an average winning margin of 46-points, or 323-points overall.

The Tigers remain the strongest team in the first half across the year, kicking 102 goals and winning 23 quarters (not including the match with Sherwood). They also won 21 quarters in the second half, kicking 73 goals across the season in that time for a total of 175 goals overall.

They have an 8-1 record against the top six teams with the only blemish coming at the hands of Morningside two weeks ago. They also have an average winning margin of 61-points against teams out of the top six, showing their true ruthlessness and overall confidence.

Players to watch
Morningside
Jordan Brown – has been very reliable at half forward across the season where he is a proven ball winner and a tremendous goal kicker. He has kicked 19 goals across the season and the pleasing aspect to his game is that if he isn’t kicking goals, he is still winning lots of the ball and that’s essential for his position.
Harrison Baxter – with Brown at half forward, Castle in the middle; Baxter has a key role to play as a valuable play-maker across half-back. Players of his skill and ability will be very influential when it comes to clearing the ball from the backline under pressure. These are things he can manage extremely well and in his best season for the club, he will be a major X-Factor.
Teejay Halkias – the 2021 Bill Clerke Medal winner as the best and fairest in the competition will be the key to the Panthers saluting and holding aloft the premiership cup. A superstar onballer who lives for the big occasion, he will be almost impossible to stop.

Labrador
Matt Freeman – one needed to put a brick wall in his way to stop him in his tracks in the Preliminary Final, and even then, he would have ran through it. His effort last week was team-lifting and helped inspire his team into the Grand Final in arguably his best performance of the season. A star onballer who dictates the flow of the game through his run and carry in the midfield.
Tom Hofert – what a difference a year can make. Last year he was playing for Broadbeach and at three-quarter time in the Colts Grand Final, his team was 30-points up and miraculously lost to Palm Beach Currumbin. Now he finds himself in the ruck for the Tigers in a Grand Final. Part of the Gold Coast Suns Academy program, he is a gifted footballer with loads of talent and will be a key in this game.
Bailey Reeves – a commanding and dominating onballer that is also part of the Gold Coast Academy program. He has the potential to be an elite midfielder and he is well on the way to making giant strides in that space. He will be hard to beat and thrive off being part of the star-studded Tiger midfield on Grand Final day.
Ben Gibbeson – a commanding rock at centre half back, he is brilliant in the air and handy on the ground. With a blend of Senior and Reserves experience to his name this year, he will have a massive say on proceedings.

How will this match unfold
The key to conquering the Tigers is to be the best team in the first half. Statistically, Labrador is the best first half team in the competition and Morningside negated that in the semi finals by taking the lead at half time (with 8.0) and hold on for the finest of wins to make the Grand Final. They must be able to replicated that again on the grandest stage of them all.

Labrador’s work ethic in the Preliminary Final last week against a strong Palm Beach Currumbin was nothing short of outstanding. There was a strong sense of unity and team work across all 22 players and to hold on in that final term kicking into the breeze was a testament to their backline and overall strength.

There is no such thing as deserving a premiership, but Labrador has had the near flawless season in 2021 and it has done everything right except for a few minutes late in the clash with Morningside.

This game has the chance to open up a bit with high scoring. Labrador has kicked 10 goals or more on 13 occasions while Morningside has done so on 11 occasions.

In fact, the only two times Morningside has kicked under 9 goals this year, it has lost.

These statistics suggest that we should so at least 20 goals kicked across both teams.

When you have two quality teams competing on the big stage like these two, and the only meeting between the pair was a thrilling one-point result, you could only hope that the second meeting would be quite similar and we’d see yet another thriller.

Labrador has a lot more depth at its disposal and that could be the spark to seal a famous Grand Final win by less than two goals.

But can Morngingside make it back-to-back Reserve Premierships?

Can’t make the game? Watch it on the live stream: aflq.com.au/qafl-live