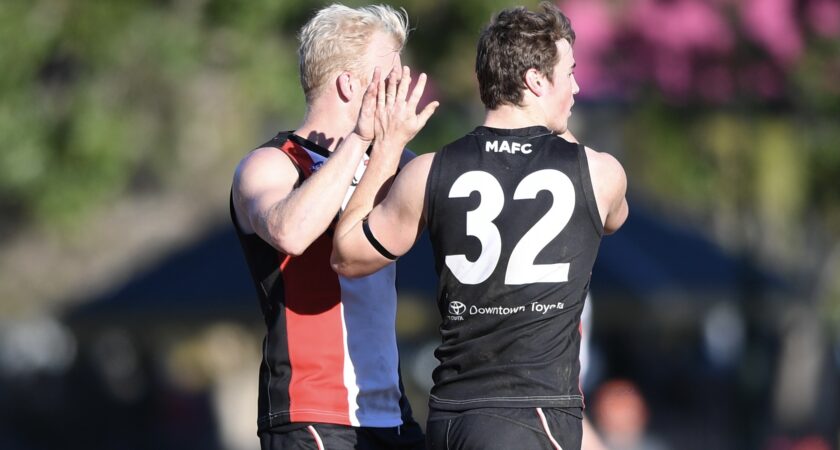 Morningside held off a fast-finishing Surfers Paradise to advance through to the QAFL Semi-Final after recording a thrilling six-point win at Sir Bruce Small Park on Saturday afternoon.

After leading by as much as 41-points on several occasions during the match, the Panthers held off a Demons’ resurgence in the last quarter to hold on for a famous victory.

Surfers Paradise went into the game with a better form line ahead of its opponents who had lost its previous three matches, all against teams outside of the top six.

Despite the poor form line, the Panthers welcomed back a host of stars to give them the edge including Ryan Banks-Smith, Saxon Crozier, James Nelis and Toby Triffett; just to name a few.

The match-up was unique in itself as it featured the last two Senior QAFL premiers fighting to keep their season alive in a sudden death Elimination Final.

The first quarter went against the traditional script of an Elimination Final between fourth and fifth where matches are generally quite close and hotly contested.

The Panthers burst out of the blocks and put on four quick goals while the Demons were still locked in the stalls and trying to find a way onto the track.  They sprinted to a 26-0 lead and the result looked like it was in the books before quarter-time.

A few missed opportunities late in the quarter denied the Demons some momentum heading into the quarter-time break.

When Banks-Smith added his second goal either side of quarter-time, alarm bells were ringing loudly for the home side. Ryan made his mark and put the opening goal on the board for the Demons at the nine-minute mark of the second term, the first goal in 41-minutes of match time.

The Panthers celebrated a hat-trick of goals in the space of four-minutes and sent the margin out to a staggering 41-points, 51-10 nearing time-on in the second term.

Surfers Paradise rallied with the last two goals of the half to cut the margin back to 30-points.

Any hope of a revival from the Demons was seemingly snuffed out in the third when the Panthers put on back-to-back goals to send the margin back out to 41-points nearing time-on in the third. This is where the scoring came to a complete stop for the Panthers.

Surfers Paradise, again added the last two goals of the quarter through Merrett and Hilton-Joyce but as had been the problem for the team across the day, it couldn’t get the margin under five-goals and build on that momentum.

It didn’t take long for the Demons to break through that five-goal barrier when key ruckman, Green kicked the opening goal of the last quarter at the two-minute mark. Hilton-Joyce kicked his second just minutes later and the margin was under 20-points for the first time since the 15.5-minute mark of the first term.

The goals continued to flow for the home team that stormed towards the finishing line like a hurricane with a barrage of goals through the likes of Pescud and Smith to cut the margin back to just five-points. Smith’s goal capped off an impressive run of six-unanswered goals in the space of 27-minutes as his team put on 6.2 to two points in that time.

The last seven-minutes felt like an eternity as Morningside held on desperately against an extremely determined Surfers Paradise outfit. The siren sounded at the 28.5-minute mark with Morningside ahead by six-points and held on after going goal-less for the last 44-minutes of play.

Henry Joyce was the clear stand-out for the Panthers at half-forward in his best performance at Senior level for the team in 2021. Alby Jones was ever-reliable in the backline for the Demons as their season drew to a disappointing close.