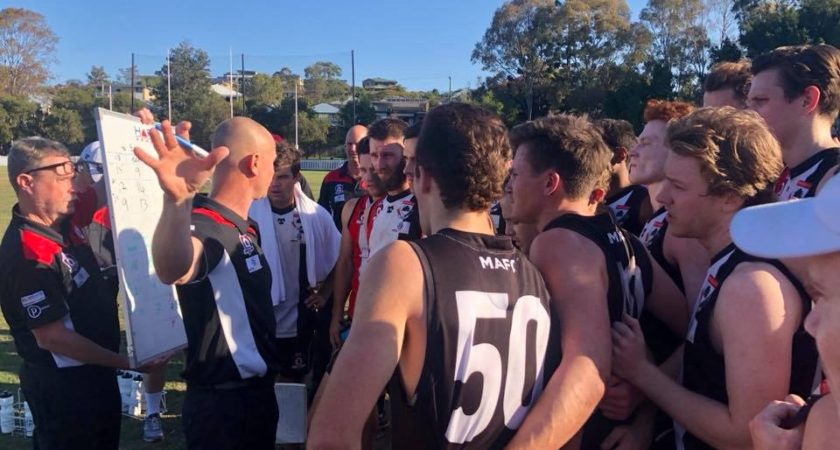 A PERFECTLY executed match plan by Morningside has carried the Panthers into the QAFL Preliminary Final against Broadbeach next Saturday.

Morningside methodically worked Surfers Paradise over in the First Semi-Final at Jack Esplen Oval on Sunday and won by 11.5 (71) to 9.8 (62) to keep their title hopes alive.

How the Panthers did it was impressive.

They knew they had to choke the Demons at their power base, around the contests, and prevent them from getting their renowned run and carry going.

It was very much like a hostile senate blocking supply for the Government. That was the match tactic and it worked.

As early as the first half of the first quarter it was obvious the Demons were in trouble as the Panthers kicked the first five goals before their opponents woke up.

Giving away a 30-point start proved to be fatal for Surfers who fought back to twice be within eight points in the fourth quarter.

But it was that word supply that was the crucial factor in the clash.

It is fair to say that the hard work of the Panthers in close was the winner. The Panthers had probably about 65 per cent of possession from contests as their big ruckmen Peter Mollison and Will Wolbers dominated.

And without their regular supply of ball from these contests the Demons proved to be vulnerable.

Morningside coach Steve Wildschut said it was the plan to try to weaken the Demons’ main strength – win the ball at the contests and thereby keep it away from their opponents.

“We wanted to keep it inside and in tight and play the game through the corridor,” Wildschiut said.

“The moment they get their run and get on the outside they’re too fast for us and that’s not our game style.

“We had to play our way and we did it for long enough – but only just.”

The two big Panther ruckmen Mollison and Wolbers were not the only talls to cause carnage.

Forward Alex Mitchell kicked five goals in a dominant display and Surfers Paradise coach Brad Moore admitted he was at a loss to come up with a viable option on the No.12.

And another tall to win up front was Rising Star Award hopeful Tom Jeffrey, who kicked three of the first four goals of the match.

At the back, Dan Frame was irresistible, and the Demons found him virtually impassable whole in the engine room Alastair Nash was outstanding.

Surfers coach Brad Moore conceded that without their usual supply of possessions the Demons engine room did not fire up, although he was pleased with the effort of the team in the second half to claw their way back into the game.

“One of the things we pride ourselves on is if we’re not winning the stoppages we try to repeat the stoppages, so we can get ourselves set,” he said.

“They (Morningside) were able to get the ball out of the stoppages and we weren’t able to reset ourselves.

“But take nothing away from their ruckmen, Mollison and Wolbers. Their ruck work was fantastic.

“When you get first use of the footy in the midfield it’s hard for our mids to shut them down.”

Surfers did not have a clear winner, although defenders Connor Manning and Jack Taylor were not disgraced, and AFL daft hopeful Brodie Foster again impressed as a link man between defence and attack.

It was a red-letter day for veteran Panther forward Kent Abey, who celebrated his 37th birthday with a victory and lived to fight another day as he winds down his remarkable career in the red, white and black.

He will now play in next weekend’s Preliminary Final against Broadbeach at Subaru Oval.

The Lions kicked 13.7 of their final total after quarter-time, when Mt Gravatt had 0.2 on the board.

It was only a final burst of 5.3 – at the same time PBC added 6.0 – that gave Mt Gravatt’s score some respectability.

Ruckman Luke Vanderfeen was a star for the Lions, who also had Tom Frazer, Alex Dawson and Zach Callinan as significant contributors.