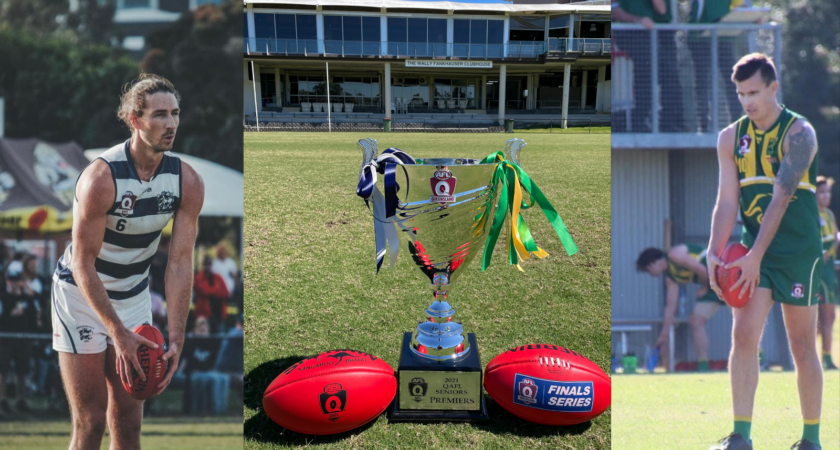 THE RUN DOWN
After yet another COVID-19 interrupted season, we have now reached the summit of AFL in Queensland with the 2021 QAFL Senior Grand Final at Southport.

This match between Broadbeach and Maroochydore is historical in many ways starting with each team in its pursuit of its first-ever Senior QAFL men’s premiership.

Broadbeach has played off in two of the last three Grand Finals, going down on both occasions. Its history has been long and decorated, but at the same time, starved of Senior premiership success since it first joined the competition in 1997. After a three year stint in the NEAFL from 2011-13, the Cats returned to the QAFL and have been a power-house team ever since, with that famous piece of men’s silverware the only prize missing from its trophy cabinet.

They do have the honour of winning the last-ever Gold Coast Football League premiership in 1996 but they would trade it in for a QAFL flag in a heart-beat, and to cap off the celebrations of the Club’s 50th year playing our great game.

Maroochydore joined the QAFL for the first time in 2020 after a succesful reign of dominance in the QFA Division 1 competition. Its entry into the QAFL in a COVID interrupted 2020 also paved the way for Noosa to become the next addition to the QAFL competition from the Sunshine Coast. The pair would unite in numerous battles across the 2021 system and continue their rich history against each other in the QFA.

After folding as an entity in 1999 due to lack of players, it merged with North Shore to form Maroochy Northshore before the merge discontinued for the start of the 2005 season and the team, now known as the Maroochydore Roos. Its success in the QFA Division 1 competition over recent years prior to the 2020 season showed that it was more than a formidable force as a club to compete at the top level of Queensland football.

After just two seasons in the competition, it is now just four quarters away from potentially standing a-top of AFL Queensland’s Mt Rushmore as the QAFL premiers.

The pair first met on Saturday August 22 where a rampaging Broadbeach team proved too strong for the new kids on the block Maroochydore, winning by 94-points (17.18-120 to 4.2-26) to set up its run to the Grand Final.

This Saturday marks 392 days between meetings, and at the 22-minute mark of the final quarter in the Preliminary Final last weekend, it very much looked like the gap would be longer.

Could 2021 J.A Grogan Medalist Jordan Moncrieff add two more medals to his collection this year?
Firstly, after collecting the Grogan Medal and John Wren Trophy for the first time last Sunday night, this outstanding full forward will be a key cog in Broadbeach’s aspirations for its first QAFL Senior Premiership flag, one that it is most capable of winning.

Secondly, Moncrieff has kicked 15 of his 59 goals against top six teams. He has been kept goal-less once (against Surfers Paradise) and failed to kick more than three goals once (against Labrador). He is a big-time player against the best teams in the competition and there is a massive chance that if Broadbeach win, he has kicked five or more goals and he adds the Joe Grant Medal to his Premiership and Grogan medallions.

Is Sam McLachlan the best player of the 2021 Finals Series?
Maroochydore has played three remarkable games already across the finals series and McLachlan has had his finger prints all across those three wins. He was a key in the come from behind win against the Sharks in week one; he was unstoppable in the inspiring win over Morningside in week two; and he was breath-taking across half back and the wing in the Preliminary Final, sealing the win for the Roos with the final goal of the game.

McLachlan has shown glimpses of what he is capable of across the home and away season, and his body of work across the finals has taken him to another level. His best and most influential game of the finals (Preliminary Final), triumphs over any performance from anyone else.

Will we see a shoot-out between the two star full-forwards?
It’s not often in this day in age where a Grand Final at this level takes place and a spear-head from each team is lining up at opposite ends of the field.

Moncrieff has proven week in, week out, why he is the best player in the 2021 competition as a leading man in the forward line for a Broadbeach team that has played so well across the season. He has kicked 59 goals from 14 games, including a haul of 10 against Mt Gravatt. He kicked six or more on six occasions and had a purple patch where he kicked 31 in four weeks. He has 18 goals against top six teams this year including four in his last outing, the semi final win over Labrador.

Scholard has been in outstanding touch across the finals series, kicking a bag of seven in the win over the Sharks and 12 across the three matches. He started the season with 11 against Wilston Grange and has 27 goals against teams in the top six this season.

Scholard has kicked just 26-percent of his team’s 237 goals for the year.

Moncrieff plays a little deeper than Scholard at times and can draw one or two really strong opponents to a contest. Scholard often pushes up the ground and doubles back into the 30 metre zone, which at times he needs to because of the lack of height.

Moncrieff has some impressive size and is likely to back himself in a strong contested pack-mark situation than his Maroochydore off-sider.

If both teams kick 12 goals or more, these two forwards will kick at least four for their team.

How much do we read into Maroochydore’s final quarter wins?
The answer to this is simple, a lot. Maroochydore was ranked first for most wins in the final quarter during the home and away season with 11 across 14 matches, and Broadbeach was second best with 10.

They have beaten Redland-Victoria Point, Morningside and Labrador in the last three weeks. In that time The Roos have scored 16.15 (111) to 4.10 (34) in last quarters across that time. They are a 77-point better side. Maroochydore has scored 36.33 (247) across the finals, and a staggering 45-percent of their total score coming in the last quarter.

What happened in the final 10 minutes of the Preliminary final against Labrador went according to form, and with 15 final quarter wins this year, it could be sweet 16 based on form.

Lastly, who wins the battle of the captains?
It’s fitting that the captains of these respective teams wear the same number, 12. Josh Searl has been a champion of Broadbeach for so many years. He played his 150th game in the Grand Final loss to Morningside last year and has given his heart and soul to this team. He showcases tremendous dash across the backline and has the capacity to work into space and hit the scoreboard. He is the spiritual leader of the club and leads this team exceptionally well by example, and was rewarded by being named the 2021 QAFL Team of the Year Captain.

On the other side, you have Maroochydore’s Josh Govan. A decorated player for Gisborne in the Bendigo Football Netball League in Victoria, this hard-nut left footer displays tremendous courage and ruthlessness that drives the engine room of the team. He did some outstanding things in the middle last week that helped turn the tide in the favour of the Roos. Since joining the QAFL in 2020, he has more than proven himself as one of the formidable leaders of the competition.

Both captains will play their role, albeit differently to the other with Searl’s experience in this competition and playing off in last year’s decider to give him that more of an edge.

Quarter by quarter
Broadbeach
1st – 7
2nd -11
3rd – 11
4th – 11
Total – 40
Traditionally slower starters statistically, the Cats have proven time and time again that they are always in the hunt across each quarter and are remarkably tough to shut-down.

Maroochydore
1st – 7
2nd – 9
3rd – 9
4th – 15
Total – 40
Winning almost as many last quarters as it has combined in the first half, Maroochydore is the fourth quarter specialists, and their quarter-by-quarter trend suggests they gets better the longer the game goes on.

TIPS FOR JOE GRANT MEDAL HONOURS
Broadbeach
Jordan Moncrieff – the obvious choice in this category as he focuses on not only leading his team to its first QAFL premiership, but he has the form on the board to prove that he is remarkable tough to stop. If he gets loose and kicks six goals, Broadbeach wins and he gets the medal.

Smokey:
Lucas Jellyman Turner – LJT has had some big matches this year and his run from the backline and pushing through the midfield has been essential to a number of wins this year. What also goes in his favour is the two QFA best on ground medal winners came from the backline in the role that he plays, so the stage is set for players like him to make an impact on Grand Final day.

Maroochydore
Sam McLachlan – he is the in-form player of the competition right now. He is strong across the backline and is a key ball winner across half-forward. He has had two best on ground performances in three finals, both performances involving comebacks of more than 20 points in the last quarter. If the game is in the balance in the last quarter, he will surge.

Smokey:
Jono Giles – he had the hard-tag put on him by McKay last week but he still had the last laugh. His effort across the finals series has been impressive in the midfield. With VFL experience to his name and also as part of Moreton Bay’s QFA premiership win last year, he is a player that stands-out and at his best, could be a key to the flag going north.

Who wins and why?
The winner will celebrate its first QAFL Senior premiership, and it would be cliche to say that the winners’ of the day will be the fans, and it’s true. If Broadbeach hold a four-goal lead heading into the final quarter, it is absolutely necessary that it kicks the first and second goals shortly after the resumption.

Maroochydore is like the Kyle Chalmers of the 100 metre freestyle; the greater the deficit, the better it rises to the challenge, but there has to be some point where the lead is too great to peg back.

Broadbeach has been here twice in the past three seasons. Maroochydore is only into its second season at QAFL level. The fact remains is that Broadbeach has been a dominant team across the season for longer, and Maroochydore has had to play its absolute best three times to rise from sixth, into a Grand Final. It’s going to be a tough ask, and if they don’t taste victory here, they will return to the big stage in 2022.

Broadbeach on the other hand, it’s time is now.