So we meet again

‘Not this time, not again,’ is what will be on the minds of the Palm Beach Currumbin players as they walk out onto the green stuff at Southport.

They were here last year, on the last day of the season and received a 53-point loss that they’ve had to live with till now. Now they get their opportunity to set the record straight.

Labrador has only lost 6 of their last 38 games over the past two seasons and were undefeated in 2017, until they met the Palm Beach’s frantic pressure in week two of the finals.

The Tigers will remember last year too, along with the fact – that of the past five encounters with the Lions, they’ve won four. There’s no doubt that Labrador believe their best is the best in the competition. Looking at their record, it’s hard to argue.

It’s safe to say there’s respect between these two Gold Coast rivals, but there’s also a healthy dislike that adds a pinch of spice to every contest. This one happens to be a grand final . . . and it looks pretty tasty too.

“They’ve got some real class in their midfield, which probably gives them the edge a bit, so we’re going to have to be on our toes that’s for sure.”

Where the wild things are

There’s a place on the footy field, that isn’t a specific spot on the ground; it’s more of a feeling that comes on when the bodies crash in. There are plenty of names for it, the contest, the stoppage, the rolling maul, the coal face. Whatever name you chose, it’s where the wild things go and that’s where this grand final will be won or lost.

Each team has their gang of tough nuts ready to put their head over the footy, for the Tigers, one to watch closely is Billy Hicks, while the Lions will really benefit if Jason Burge can win it in close. Adding to the chaos in the clinches, will be Thomas Thorsen and Adam Clarke at stages for Labrador, while Cornish and Dignan will roll through the middle for Palm Beach.

Without doubt these are the two best midfields in the QAFL, not only because of the talent, but they bat so deep too. Labrador hard-nosed utility Zac Brain can run through the midfield, as does Thorsen and Morris. The Lions list of players that can hold a spot in the on-ball division is endless, boasting the likes of Troutman, Woolley, the Thynne brothers and young talent Jacob Dawson.

It could be argued that Palm Beach has bigger ‘names’ in their midfield, but underestimate the Tigers engine room at your own peril.

“It’s just going to be a matter of who can win the contested ball I think,” said Palm Beach Currumbin coach Chad Owens.

“Obviously their bigger bodies are going to be an issue, that’s where they got hold of us last year in the grand final, but they’re a different side, we’re a different side – I think we’ve got a little bit more run in our legs than they do.

To the untrained eye, it might look like one Palm Beach player, but if you check the jumpers it’s actually two. Stephen and Thomas Thynne are both capable of causing enough trouble for the opposition alone, but when there’s two of them the problem is magnified. Both have genuine leg speed, a nasty side step and a good sense of where the goals are.

Labrador has their own dangerous duo, while Geelong have Dangerwood, the Tigers have ‘Waydenmills’. The tall defender combination of Jayden Young and Wayde Mills, is just as destructive as any partnership in the QAFL. Should all things go according to the script, Wayde Mills looks likely to receive an abundance of attention from the Lions; so if Simon is silenced, Labrador will need Garfunkel to turn it up.

As he showed on countless occasions this year, Young is capable of being just as troublesome as Mills. While young doesn’t pose the same aerial threat as Mills, he’s more damaging on the ground and seems to be able to escape any situation. His nickname is ‘Rooney,’ but it should be Houdini.

Still, it would help the Tiger cause to have both up and firing. A lot hangs on Mills’ ability to work around whoever is going to be his shadow for the day.

“Look, Millsy’s a big boy, he’s a good competitor, so look, he’s had to deal with that all year and he’s had a pretty good year hasn’t he? said Shattock.

“He’ll work his way around it.”

These two teams have kicked a lot of goals this year, surprisingly exactly 268 each – and the majority of them have been kicked by a small handful of gunslingers at either end.

Retzlaff is the one for Labrador, the league’s leading goal kicker has kicked over five goals on five occasions and finished on top of the goal kicking table while missing games at the beginning of the year through injury. Barry Hall is dangerous too, but Retzlaff really works hard up the ground and is the conduit of their forward line supply. If anyone needs a big game it’s the big skipper up forward for the Tigers.

Retzlaff set the tone early in the Tigers’ last final against Broadbeach, leading by example and crashing the packs early. ‘Retzy’ is a big game player, he loves the big stage and when he’s on song, there’s no better center half forward in the comp.

Jarryd ‘Yak’ Douglas is a completely different sort of player to Retzlaff. Yak usually plays closer to the goals and isn’t as tall as his Tigers counter part; he’s more your traditional full forward. A footballer’s footballer, Yak’s kicked over five goals on four occasions this year, but has only played the 11 games.

Douglas is an incredible mark on the lead, but can also clunk one in a pack, launching at the footy and using his fantastic hands. When the ball goes to ground he’s equally effective, using his physicality to barrel opponents out of the way and tackling hard. Douglas is the sort of player that steps up when the team needs him to, rising to the occasion and influencing the contest at the right time.

“We’ve got some good tall forwards, but they’ve got Douglas, you know?” said Shattock.

“He’s a good player in his own right, so it won’t be won and lost with the forwards I wouldn’t think.” 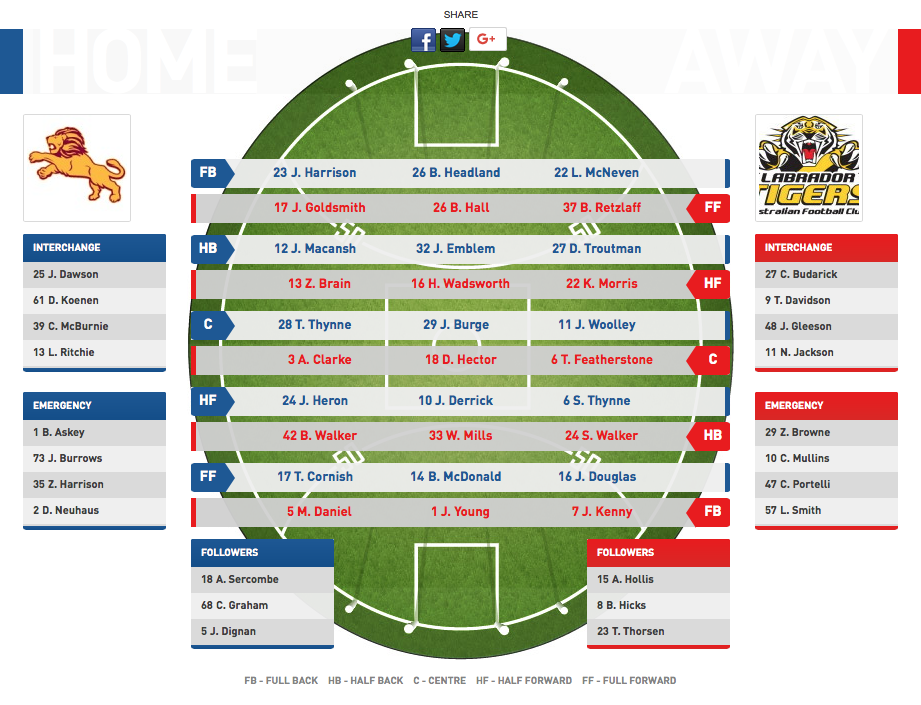