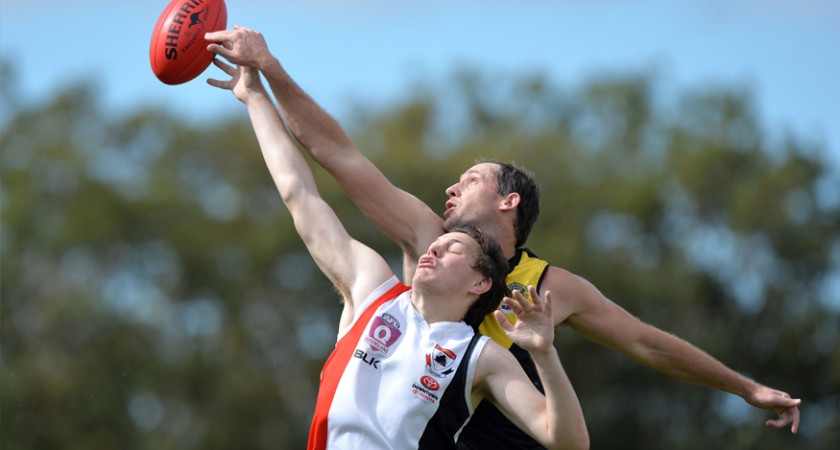 At the 27-minute mark of the last quarter a hero stood up, and that hero couldn’t be anymore fitting.

The Tigers were four-points down and time was of the essence. Todd Featherstone took a mark deep in the pocket. The wind was blowing the ball away from goal… it was going to take some kick.

What happened next would break a 20-year premiership drought, would hand Featherstone his first ever-senior premiership, and would end his career in the perfect way.

Take a bow, Todd Featherstone, the goal you just kicked will go down in QAFL folk law.

Despite the late heroics, today’s game was the best of the year. It was tough, it was tight, it was ferocious, and it was anyone’s to win.

Kicking with the breeze, Labrador was on early.

Their big players were standing up in big moments. Featherstone, Lappin, Baxter and Fraser all hit the scoreboard. The difference early was the Tigers’ ability to make the most of their forward 50 entries.

Up the other end, Labrador was forcing Morningside to bomb the ball in long, taking Abey and Mueller out of the contest.

At quarter time, the margin was 21-points.

When Labrador had repeat forward 50 entry after entry in the first five minutes of the second quarter, it looked like the margin was going to blow out.

Something changed at the 10-minute mark.

Instead of blazing away into the numbers, Morningside brought their half forwards up the ground, and kicked it over the top of the loose man, Chris Ryan, and into space.

When Mollison kicked one late in the quarter the Panthers were up, and would head into the rooms with a three-point advantage.

The third quarter was as good as finals footy gets. Neither team gave an inch, there wasn’t such a thing as an easy possession, and just when the game looked like being split open, one side would kick a major against the flow.

Abey was finally getting some separation from Bantoft who wore him like a glove all afternoon, and Fraser up the other end was stepping up when it counted.

The three quarter time siren went, and the scores were level. You couldn’t write a better script.

The biggest factor in the game was going to be the wind. Labrador would have to defend for their lives. It was backs against the wall type of stuff.

Despite the ball being locked in the Morningside 50 for the majority of the first five minutes, they couldn’t buy a goal. That was their moment to put the nail in the coffin.

Josh Fraser went into the ruck against Mollison, who was unbelievable all day, and it changed the game.

They went goal for goal for the next four, with Mueller’s major at the 20-minute mark giving the Panthers a three-point advantage.

That’s when Featherstone weaved his magic, and the rest is history.

Lappin kicked one a minute later to put the result beyond doubt. The Tigers had done it. Labrador are the 2015 QAFL Premiers.

How can you not love football? What a game. What a day.

“This is the best feeling you can get being involved in a footy club.

“It must have been a ripper to watch.

“We had to do the basics right, and do them well. Kicking into the breeze was going to be difficult. Tactically I’m exhausted.

“The turning point for us we felt was Fraser into the ruck, which we hadn’t done all year, and go a bit smaller up forward.

“The football gods look down on us.

“I’m just really happy for Featherstone, for Davey, Lappin, Fraser, Throsen, Daniel, we just had so many that had never won one, so I’m just wrapped for them

“It’s tomorrow when you realise what you’ve achieved.”

“I wouldn’t do it any differently if I had my time again.

“I said to them it’s not okay to lose. It’s okay to do you’re very best and leave nothing on the table. I know we did that.

“There is an amount of pain, but I know that no one cheated. They were under siege early and they found a way back.

“You can lean on this, they now know that if their backs are against the wall, they know they can fight back.

“The journey teaches you more than the destination.”