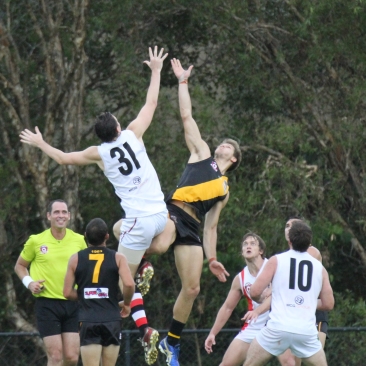 Why they will win:  Momentum

This comes in two forms. They haven’t lost a game this season and they’re recognised as the benchmark and that will certainly give them confidence in the match. The other side to it is that any time they have been challenged this season, the Panthers have been able to get a run on and break the game open. If they get a sniff and start to kick a few goals in a row, they will be unbeatable. The fact that they’ve proven themselves to be the most formidable side this year certainly suggests they’ll be tough to beat.

Why they won’t: Element of surprise

It’s hard to replicate the atmosphere of a grand final and you don’t know how players will cope on the big stage until you get there. A number of the Panthers have grand final experience and that will help, but I’ve heard a lot of people this week tell me grand finals are “funny things”. Coming up against Labrador is interesting because they have never played the Tigers at full-strength, so there are some more unknowns going into the grand final than there would be against a team like Palm Beach or Mt Gravatt.  And it’s that unknown that could provide the biggest danger for the Panthers.

Paul Shelton and Nathan Kinch have been two of the standouts this season for the Panthers, but they have quite a few genuine match winners in their side. These two will play a big part in a Panthers win, as they have all year.

X-Factor: Lachie Russ
A highly rated player, Russ has stepped up this season and he has the ability to tear games open, with his pace and skill. He has taken on a more prominent role for Morningside this season, to the point where a number of people floated him as a Grogan Medal smokey.

Under the radar: Tyson Upton

It’s hard to think that one of a side’s captains could be going under the radar, but that’s been the fall out of such a strong Morningside season. Upton is playing some of the best footy of his career, but surrounded by players like Nathan Kinch and Paul Shelton, he’s happy to just stay out of the spotlight. There is no doubt that he is one of the most important players for Morningside and they’ll be hoping for a fairy tale for his 200th.

Why they will win : Defence
Labrador might not have won as many games as Morningside , but their defence only conceded 12  more points through the home and way season. Kurt Niklaus and Tom Daniel have been the key to the Tigers’ rock solid back line and it’s been their most consistent area of the ground in terms of player availability. If they win on Saturday, it will be built from their back line.

Why they won’t:  Slow Start
In their last two finals, the Tigers have come from behind to clinch a narrow lead, and they’ve trailed early on in the match. That won’t work against the Panthers. If they are trailing at three-quarter time, it’s a massive task to overcome, as Morningside have shown this season. Labrador need to take advantage of their early opportunities if they want to make sure they can claim the flag,

Match winner: Ryan Davey
No prizes for guessing that one. Davey has been their most prolific player and if it comes down to the wire, he’d be the one most likely to stand up.  Though, Todd Featherstone, might lay claim to that mantle after the last couple of weeks.

X-Factor:  Zac Brain
He’s flown a few times this season and added some highlights to his reel in a breakout season. The Noosa junior came down to the Coast last year and had a solid year for Coolangatta, but he’s really found his feet, and some airtime, at the Tigers.

Under the Radar: Adam Baird

He was picked in the QAFL state squad earlier this season, but the Tigers wingman has gone largely unheralded through the season. He has been a super contributor to the Labrador team and has really come into form at the back end of the year.

QAFL and QWAFL Grand Final Day will jam packed full of action and there’ll be plenty of coverage of it.

The BayFM Sport Show will be broadcasting LIVE from Yeronga from 8am-12pm, featuring interviews with players and key Queensland football figures..

For all the info about the Grand Final day, click here: