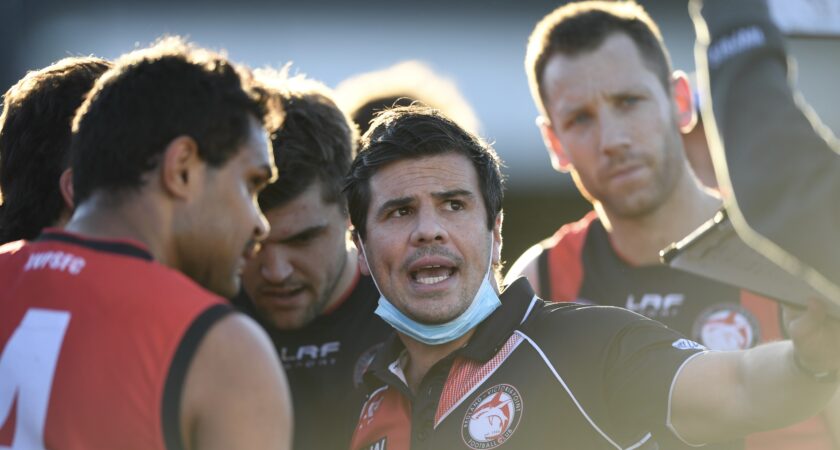 In Brief
The Sharks and and the Roos kick off the return to QAFL football for the first time since July 24; and needless to say it has felt like an eternity.

These two teams will match up considerably well with a very similar attack and a dynamic defence and have beaten all opposition outside of the top six, with at times, great confidence and ability.

Redland-Victoria Point have been outstanding on its return to the QAFL and have been keeping things business as usual with a string of consistent performances against all opposition.

Maroochydore started the season strongly with a number of big wins. Its biggest problem perhaps is that it has just one win against teams inside the top six; and it has yet to face ladder leaders and premiership contenders Broadbeach at all.

RVP’s last quarter of football saw it product 8.1 in the win over Sherwood to gap off its best half of the year to date, 13 goals. It averages 15 goals per game across its 13 matches.

Maroochydore has an average of 14 goals per game across its 14 matches this season.

Redland-Victoria Point has an average losing margin of 11.5 against teams inside the top six. That has come against four teams with Morningside its biggest threat, being the only team to salute against it twice this year with a combined winning margin of 11 points. Ladder leaders Labrador inflicted its biggest loss of the year by just 21 points.

With six wins against teams outside the top six, The Sharks have an average winning margin of 55 points (334 points), with its biggest win coming at home against Wilston Grange to the tune of 97-points.

Maroochydore has a vastly different record against teams inside the top six; recording one win from its seven matches. Despite the lopsided win/loss ratio, it has an average losing margin of just 14 points with the highest coming against Morningside, 22 points when scores were dead-level at three-quarter-time. It has tasted victory just once against a top six opponent with a 41-point win over Surfers Paradise.

Against teams outside the top six, the Roos have an average winning margin of 55 points, or 333 points in total.

Redland-Victoria Point
Jarrod Huddy – with 12 goals this season, he is a menace in the ruck. He drifts forward and loves taking contest marks. If the game is close and the Sharks need a goal to hit the front, the midfield just need to send the ball long to the top of the square and Huddy will deliver. There are few better contested mark players in this competition, especially one that plays ruck.
Peter Yagmoor – with 28 goals to his name this season and five in his last outing against Sherwood, this dynamic left footer is the man you want with ball in hand inside the forward half when the pressure is on. He lifts for the big moments.
Adrian Williams – his experience and record in football speaks for itself and he has a strong presence and leadership about him where ever he plays. From taking down the key forwards of the opposition to playing a key role down forward. He has yet to kick a goal this year but he kicked 45 from nine games in 2020. He knows the game almost better than anyone else in his team.

Maroochydore
Mitch Scholard – he has kicked 49 goals this season and looks unstoppable when he is in full flight. He leads to the space well and his accuracy is outstanding. He commands the forward 50 and delivers when required.
Josh Govan – one of the great leaders of this competition, the former Bendigo FNL product is the captain of the team (just as his brother Hamish captains Kyneton back home where Josh played all of his football), he has a lethal left foot kick and thrives around the contested ball. The ball is safe when it’s in his hands, and it is often in his hands when the pressure is on.
Jacob Simpson – a quality ruckman who uses his height to advantage. He is a brilliant tap ruckman and plays well a kick behind the play as required. He is tough and difficult to get around.

Where will the match be won
Across half back. The Sharks boast a stronger defense and they’ve got some quality runners that can carry the ball swiftly from half back to half forward. Led by runners such as Salter and Johnson, they have the talent to beat the forward crumbers of the Roos and turn defense into attack really quickly.

Verdict
The pair match up so well statistically and strategically. The biggest downside that the Roos have is its 1-6 record against teams in the top six and that could very well be the difference between winning and losing this contest. They had six very winnable games and couldn’t close the matches out. This is finals, it could come back to hurt them.

The Sharks have been one of the favourites right across the year and with good reason too given its experience and depth. If Williams shuts Scholard out of the game, that will be the difference.

Catch this game on the live-stream!