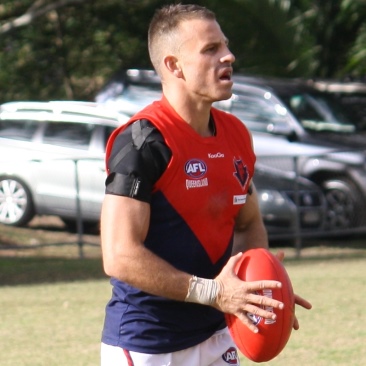 He’s not calling it a comeback, but when Jake Ryan lines up for Surfers Paradise tomorrow, that is what it will be.

The 32 year-old will play his first game of the season for the Demons, and his first since the side’s 2013 SEQAFL Division one semi-final loss to Palm Beach.

Ryan has trained with the team over the last month, but this is the first week he is available to play and the 2012 Duncanson Todd Medallist said there was no reason not to throw himself in the deep end.

In a bizarre twist, Ryan will be playing alongside some of the youngsters he coaches in the Queensland U18 side, with Dylan Mutu, Cassidy Haberfield and possibly Darcy  Trask in the Demons side, a prospect he is excited about.

“I guess I have to make sure I do anything I tell them to do,” he said.

“It’s really exciting to see how much they’ve improved from last year and it’s going to be great to run out with them.”

Ryan’s fitness  will not be an issue – he ran a 15 beep test just this week, but he admits it will be a baptism of fire against the Panthers.

“Fitness wise, I’m probably as fit as I’ve ever been,” he said.

“That means bugger all once the ball is bounced – competing in footy is a whole other type of fitness.”

Ryan will inject some experience into the Demons side, but says he will not be taking over on Saturday.

“I’ll be just trying to help our leaders,” he said.

“I won’t come in and take over the ship.”

Surfers Paradise coach, Beau Zorko, said it would be great to have Ryan back in the side against the Panthers.

‘The speed of the game will be good for him and I think he’ll have a bit more room to move than in competitions we’ve played in in the past,” he said.

“We need some wise heads just to navigate traffic and marshal the troops.”

While he knows it will be tough, Ryan said it was a pretty easy decision to throw himself in the firing line.

“If you’re going to bite off more than you can chew, just chew harder.

“I love playing footy, so I’ll just try my hardest and compete.”