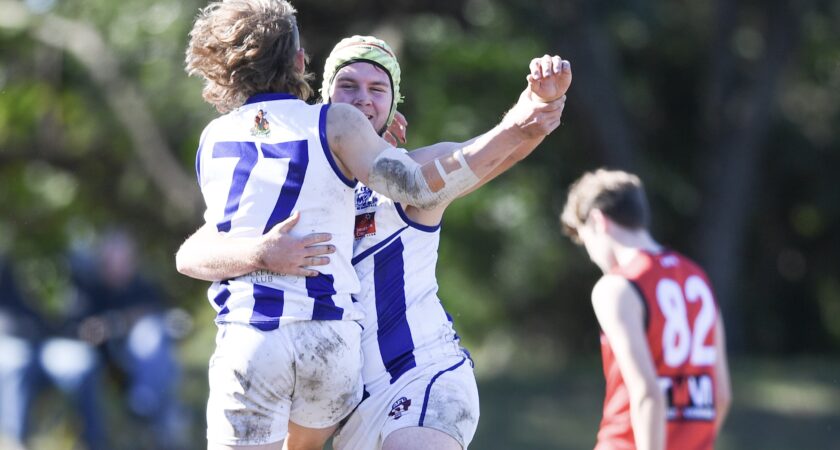 In  Brief
For Wilston Grange to have its Colts playing finals is a tremendous effort and reward for where the club is headed. Under the guidance of Brent Moloney, the club has put a massive focus on youth, not just at Senior level and at Junior level and there is a really positive community feel of unity on where this club is headed, so they should be proud of what they’ve achieved now, and what they’ll achieve in the future.

As for the team, to be 1.5 wins and percentage out of the top two is a sign of a great season in a highly tense battle for finals positions. This is something that Broadbeach know too well as it snuck in ahead of Palm Beach Currumbin and Noosa by half a game. That is a remarkable feat and also a great sign of the closeness of this competition. The Cats are here to make a statement, and no game is an easy one in this close-knit finals campaign.

Players to watch
Wilston Grange
Ethan Keramidopolous – if you haven’t heard of him before, you’ll hear a lot more of him in the future. This lethal left-footer has been one of the big shining lights of this team in 2021. A regular finder of the football and a handy goal kicker, he made his Senior debut on the back of some great efforts and kicked a goal.
Jack Campbell – a brilliant user of the ball and a genuine stand-out in the team. He leads well and showcases tremendous presence around the contest. Sporting the number 8, his best footy is well ahead of him and this match will see him shine on the wing.
Kuot Thok – named on the bench in this game, he is a human highlight reel. Outstanding in the air, tremendous goal sense and is a strong at contested marks. He will break this game right open and inspire his team mates.
Sam Pettigrew – a member of the Brisbane Lions Under 17 Academy Squad, he is the real deal. A classy forward, brilliant user of the ball and a treat to watch in full flight.

Broadbeach
Jared Eckersley – a member of the Gold Coast Under 17 Academy Squad, he is a menace at centre half back. Brilliant with his hands, loves taking on the best opposition forwards. He stands out and is pure class.
Kye Reynoldson – a solid force in the ruck, this Gold Coast Under 17s Academy Squad member was a stand-out in the match against the Lions this year and continues to develop at a rapid rate for a player of his size. He was best on ground in the Cats’ win over Wilston Grange in Round 15 and will continue that form this weekend.
Taine Dawson – a member of the Suns Academy squad, Dawson is a brute force at centre half forward. He has a dynamic presence, safe hands and a good engine that will see him run out games harder for longer.
Jake Rogers – a dynamic midfielder who excels well at reading the ball well off the ruck contests and uses it to perfection. Was rewarded for his great efforts this year with a Senior debut against Mt Gravatt. The best is yet to come for this young star.

How will this match unfold
This is going to be a tough contest. If the game opens up and is played at a more free-flowing pace, it will suit the runners of Broadbeach and the ability of its tall forward set up to catch the opposition defenders off guard. With two games over 100 points this year, Broadbeach will be better suited to a high scoring encounter, especially when one came at the hands of this week’s opponents.

Wilston Grange have done a lot right this year and it’s exciting to see their progress on and off the field. There is enough talent in that team to challenge for the flag but a lot of what happens on the day will depend on the strength of its defense. If the backline remains tight and switched on, there is enough pace off half back that can transition the ball forward and keep the ball locked in their attacking half of the ground. Good luck picking a winner here, but needless to say it will be an enjoyable contest.

The Roos have been one of the best performing teams in the competition all season. A bottle neck of teams from second to eighth has made each game challenging but when the Roos have been able to dictate games, the goals are flowing and the opposition defender’s heads are dropping.

The Vultures have a lot to be proud of this year with its backline proving to be one of the strongest in the competition. They have been one of the true battlers and to be ranked third in defense against some impressive forward-lines is a testament to their hard work.

Players to watch
Maroochydore
Hunter Moore – is there a player on the ground that commands greater presence than this menacing forward? Moore is a machine with his vice-like grip when it comes to taking marks and pin point accuracy with kicking goals. He has kicked 21 goals this year including four in his last outing against the Sharks. A member of the Lions Under 17s Academy program, he is definitely one to watch.
Caleb Silva – a strong leader across half-back, Silva is an exceptional talent and user of the ball. He has a great football brain and knows how to help set up transition from the back half to the forward line. Another member of the Lions Academy program, he is one of the key backmen in this competition.
Jordan Michael – this power forward started the home and away season with a bag of goals and ended it with a bag. With an impressive 21 goals across the season, he is playing his absolute best football this year and there is a lot of upside to what he can deliver for this club this year and beyond.
Bailey Hahn – a wonderful onballer blessed with wonderful talent. He has been one of the most dominant players in this competition with a string of consistently outstanding performances. He rarely plays a bad game and reads the play so well. It will only be a matter of time before he is thrust into high levels of football.

Mt Gravatt
Matt Hollier – dynamic on the wing, Hollier has had a break out season that saw him rewarded with selection in the Lions 17s Academy Squad. He is a goal kicking midfielder that is very handy at creating opportunities and winning the ball from half-back. He finds space really well and is a brilliant user of the ball.
Bailey Tome – a remarkable midfielder who works his way out of traffic well with ball in hand. His dynamic skill-set makes him difficult to match up on. Was a member of the Lions Academy squad and deserved it too. His best football is ahead of him, but for now, let’s just enjoy what he can do for the Vultures across the finals.
Dakota King – the key target in the forward line, King is an excitement machine. With 26 goals to his name this year including eight against the Sharks, he will be a handful. He kicked two goals in the clash against the Roos earlier this year and was one of their best performers on the day. Look out, he is ready to take make his presence felt.
Joshua Smart – lives up to his name in the backline. A consistent performer and taking on the best forward of the opposition. He is rarely beaten and when he has a great game, the team are better for it.

How will this match unfold
Maroochydore will come out with all guns blazing. It has the second best attack in the competition and faces the third best defense. If they can get the game on their terms early, they’ll take some beating.

The match-up back in Round 3 feels like an eternity ago but it still stands as Maroochydore’s third lowest score of the season. With four wins from its last five games, including 8.2 in the last quarter to beat the Sharks by 113-points in the last match, based on that form, it will be tough to beat.

Mt Gravatt has a 3-2 record in its last five games, including dropping its last two matches to Labrador and Morningside, the only occasions where an opposition has put 10 goals on them. Maroochydore have had this happen three times.

If the Roos have six goals or less on the board at half-time, it’s game on, otherwise they may very well salute.