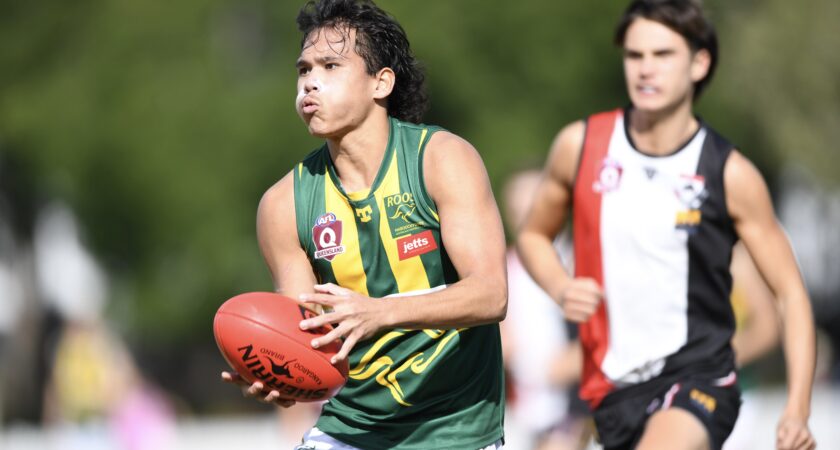 Semi Final – 1 | Labrador
Labrador v Morningside
In  Brief
Labrador has been arguably the best-performed team of any that has competed across the Seniors, Reserves and Colts competitions in the QAFL competition this year. With 15 wins from 15 matches, it has seemingly been untouchable.

The club has celebrated a remarkable season across all three top grades and the success of this decorated junior team is the reward for its hard efforts.

Labrador has kicked 1292 points this year at an average of 86 points per game; ahead of Maroochydore who contest the other Semi Final. It has conceded 29 points per game to rank number one in the competition in this space.

Morningside bowed out of the 2020 finals race last year in the second week of the finals to eventual premiers Palm Beach Currumbin. It has improved greatly this year with 11 wins across the season and features the third best attack and second best defense in the competition with an average of 64 points for and 38 points against in an outstanding home and away season

Meetings this year – NONE

Players to watch
Labrador
Josh Young – he has been unstoppable at full forward this season with 31 goals including 11 in the opening round victory over Redland-Victoria Point. This was the first of six games that he kicked multiple goals in. He also found himself playing in the Reserves where he kicked 16 goals including seven against Sherwood. Is he in line to keep another big haul?
Levi Fyffe – keep an eye out for this young gun. He has played just the six games this year but he has stepped up from Gold Coast’s Under 17 Academy squad and he has loads of talent. It’s great to see a young player of his ability make his mark at this level.
Louis Plain – reliable midfielder who wins plenty of the ball and uses it well. His start to the season was electric where he was a key stand-out in five of the first six games including best on ground twice.

Morningside
Bryce Longland – a Brisbane Lions Academy player with a bright future in the game. A stand-out at full forward who is strong at taking contested marks and a valuable tall to have on the ground. Has a season’s best haul of six goals.
Connor Trewin – a reliable half forward who is very damaging when he gets his hands on the ball. Has been a consistent performer across each game and is very handy with his endurance.
Caleb Hammond – a Brisbane Lions Academy member, he tested well at the AFL draft combine last year, finishing equal fifth in the agility test with fellow Lion Darcy Priest on 7.86. In his final year at Colts, he has shown that he is not only a star of this competition, but in greater competitions to come.

How will this match unfold
It still comes as a great surprise that these two teams have not met at all this season. The pair last met on September 2 last year where Morningside sent Labrador crashing out of the finals race in the Elimination final by four-points. Wouldn’t we love another game like that?

The key is simple, keep Labrador to four goals at half-time and the Panthers will be close to keeping the goal tally to less than 10 and set up a stunning win.

The Cats celebrated a commanding 27-point win in the Elimination Final over Wilston Grange last week. The Cats sent home nine goals to one in the middle quarters to set up an impressive win. Its five goal to nil third quarter showed the dominance of the midfielders and its ability to dominate all areas of the ground.

Maroochydore was at its clinical best in the second quarter with four goals to one on its way to a 20-point win over Mt Gravatt. It was said that the Roos needed to be kept to six goals or less in the first half for the Vultures to have a chance, but the Roos put away seven and set up an impressive win.

Meeting this year – NONE

Players to watch
Maroochydore
Decklen Faulkner – kicking three goals last week, this dynamic forward is a must-have in your team. He has 26 goals to his name but has a season’s best of just four, and a lowest haul of 1. He has kicked three goals on seven occasions with the Roos winning on five occasions.
Luke Gregory – a tough onballer who works hard around the contests. He isn’t afraid to take the game on and reads the play well off the rucks. Has been a consistent player across the season, often falling into nice purple-patches of form.
Jae Bath – a stand-out player in the backline who was ever-reliable in taking down Mt Gravatt’s forward line last week, especially when the pressure was on. He is much loved and respected around the club and he is underrated by his opposition. A consistent contributor who is a real team player.

Broadbeach
Riley Matheson – look out for this young gun from Hervey Bay and the Brisbane Lions Academy. He is no stranger to top level football, being part of the development program for quite some time. Check out more of Riley on the Channel 7 news story via the following link – https://bit.ly/3DISrWI
Ezekiel Stortenbeker – a quality and reliable defender that runs well off half-back and sets up the play further down the field. He is an asset to this team and always gives his full effort.
James Packer – what he lacks on financial riches like his name sake, he makes up for in talent. A genuine tough player with speed and class to burn. He regularly gets the praises of his coaches and is a lethal presence across half forward and knows how to find and create space.

How will this match unfold
It is quite remarkable that the two teams have not faced off this year, much like the two teams in the other semi final. Broadbeach has enjoyed an impressive year and will be desperate to atone for the Grand Final loss to Palm Beach Currumbin last year.

Maroochydore is riding a nice wave of momentum at the moment and it will take some beating. Same rule applies to last week, if it’s kept to six goals or less at half-time, Broadbeach will run over the top of them in the second half.