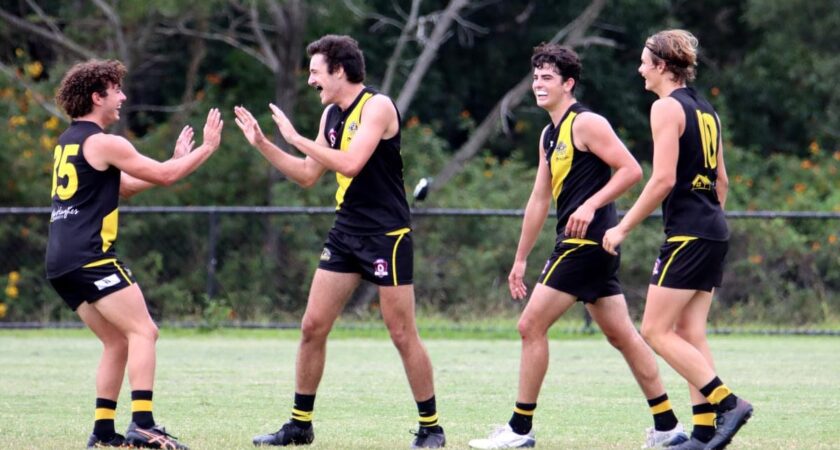 BRIEF
Labrador has been the best team in the Colts competition all season and it is of no surprise that they have made the Grand Final considering their near flawless performance since the opening bounce of the season.

The Tigers have not been defeated in their 16 matches and for the most part, it didn’t look likely. This group of players is the foundation for the strength of this club, and regardless of the result at Southport, the future is in good hands.

Broadbeach is one of two teams in the competition that has leaped from sixth into a Grand Final and that in itself is a remarkable achievement considering the circumstances of the restricted season.

It is not surprising that this team has continued its sustained success this season after going down in the worst of circumstances in the premiership decider last year (50 point turn around in the final quarter to PBC) and to have the opportunity to turn it around again thanks to a flawless run through the finals is just the momentum they need.

This young team of Tigers continue to showcase that it is the best group of players in any team across the QAFL. It has won a staggering 50 quarters which is the most by any team across Colts, Reserves and Seniors.

What is more astounding is that it has won 25 quarters in the first half and 25 in the second.

Labrador has been a better attacking team in the first half in 2021, kicking 104 goals in the first half, about 6.5 goals a half, and 93 in the second half. They average just a tick over 12 goals per game which is quite remarkable for this group of players at this level.

The Cats have had a very solid season and have shown through their efforts across each quarter. They have split their halves, winning 18 quarters in each and has worked very hard defensively across the year to win games and doing what is needed to keep the scoreboard active and stay in front.

Broadbeach has kicked 130 goals across the season; 63 in the first half and 67 in the second. They average just under 9 goals per game but their defensive game has seen teams struggle to kick winning totals against them.

PLAYERS TO WATCH
Labrador
Josh Young – four goals in the semi-final win over Morningside two weeks ago and 35 on the board this season. This dynamic full forward is one of the reasons fans of football get to the early game on a Saturday and see the future of the competition playing some mesmorising football. A genuine excitement machine that has delivered a great deal of success to this playing group.
Nathan Wright – for every successful team, it’s so important to have a commanding ruckman that not only wins the hit-outs around the ground but has a dominating presence around contested ground and aerial situations. He has had an outstanding season and played his best game in the semi-final. If the Tigers taste premiership success, he will play a vital part in it.
Ky Nicholls – At just 15 years of age, he has kicked more than 35 goals for the season and is an exceptional player at ground level and a great opportunist. His team work with Young in the forward line has been a key to why this team has been so active with its high scoring across the season and shows that Broadbeach will have a tough day at the office if it isn’t success in keeping the likes of both Nicholls and Young out of the action.

Broadbeach
Cooper Parkes – when the team needed someone to step up and spark the group to life, Cooper was the valuable force up forward to turn the tide. His three first half goals gave the Cats the edge and his 18 goals across the season, including seven of those in the past two weeks gives he and the team valuable momentum.
Ezekiel Shortenbeker – his start to the season off half back was nothing short of outstanding. His month was as consistent as anyone else in the team, and it’s fitting that his attempt to book end the season with string of credible team-lifting performances, has come to fruition. A dynamic backman who will be a valuable playmaker for this team.
Jared Eckersley – has been the player of the finals series across the competition. He was a rock at centre half back last weekend and he continues to deliver a string of performances that inspire his team mates when the game is on the line. A fine talent who will only get better with more pressure matches, none bigger than this in his career.

WHO WILL WIN?
There is a redemption story unfolding with Broadbeach eager to re-write the mishap of the Grand Final loss last year and its run through the finals this season has been nothing short of statement-making.

On one hand you have a team that hasn’t lost a game this season, and another that is clawing its way back to the top of the mountain and eager to finish the job that it didn’t do in 2020.

There is some good feeling about this because either way, a great story will be told; one that hypes up the perfect season for the Tigers, the other; a redemption tale completed by Broadbeach.

Labrador hasn’t done anything wrong this season, and often with teams that have produced a body of work across the season like they have come unstuck at the final hurdle; but not this team, it will make a strong case to go the journey and win the title.

Can’t make the game? Watch on the live stream: aflq.com.au/qafl-live