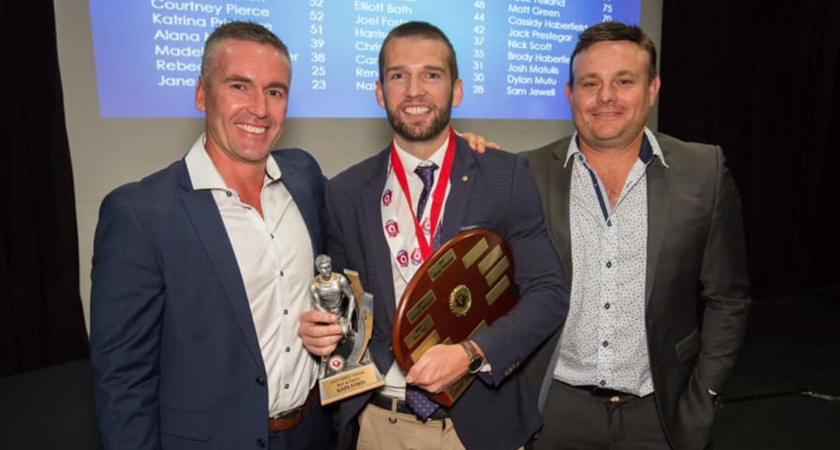 Sunraysia League product Kain Ford has ended the Haberfield dynasty at QAFL premiers Surfers Paradise by taking the coveted best and fairest award for the Demons.

The 26-year-old midfielder, a model of consistency through 2019, iced a tremendous season that included state representation, a place in the QAFL Team of the Year and a grand final victory with Surfers’ biggest individual gong.

“What a few weeks it has been,” noted Ford after he polled 79 votes to beat fellow midfielder and ex-Victorian Jack Yelland (75) and equal third placegetters Matt Green and Cassidy Haberfield (both on 70).

Ford’s victory meant that for the first time in five years there was not a Haberfeld name attached to the Surfers best and fairest award.

Claiming by far his biggest and most prestige personal accolade, Ford revealed he had been in successive losing grand final sides when he played with the Nairne-Bremer Rams in the Adelaide Hills.

“I played there in two losing grand finals, one by two points, then the year I moved up here (in 2017) they won it,” said Ford.

“So I guess this year has certainly made up for it,” he said.

Good news for the Demons faithful, after their first grand final victory since 1998, is that Ford intends to stay put.

He is getting married to girlfriend Caitlin in February.

Runner-up to Mt Gravatt’s Frazer Neate in the Grogan Medal count but runaway winner of the coaches-driven Syd Guildford Trophy, Thynne blitzed his teammates at the Lions’ count.

He polled 322 votes and was way ahead of runner-up Tyler Cornish on 248 and third-placed Nick Crowley on 218.

The award made up in some small way for PBC’s loss to Surfers Paradise in the grand final at Metricon Stadium.

His runner-up finish behind Thynne meant it was the fourth time in as many years that Cornish has been the bridesmaid in best and fairest counts.

Super performances in three QAFL finals for Morningside led to Toowoomba product Brad Howard taking the best and fairest award at the Panthers.

Howard, 31, had a good season as a creative half-back flanker and midfielder, but fired up in the play-offs when he was fourth in the count heading into the big end-of-season matches.

Unlike other clubs, Morningside’s voting for the Devery-Kelly Medal goes beyond the regular home and away fixtures to include finals and this is where the ex-St Kilda player took control.

“Brad was fourth on the voting heading into the finals but then he had three cracking games after that,” said Panthers coach Clint Watts after Morningside ended the season in third place after losing the preliminary final to Surfers Paradise.

“So it was not surprising that he also was named best in finals for us.”

Two players from opposite ends of the continent have dominated the Broadbeach best and fairest award.

Jackson Fisher, who emerged as a player of quality at Subaru Oval this year, when the Cats finished fourth, took the accolades with 78 votes, beating Joel Newman (65) and dual B&F winner Josh Searl (54).

Fisher linked with the Cats this year from the Southern Mallee Giants while Newman hails from the Cairns Saints, some 3000 kilometres north of where Fisher hails from.

Early news from the Cattery is that they expect to lose handy winger Nick Burton, who is heading overseas for work.

Coach Beau Zorko said the club expects to retain about 90 per cent of this year’s playing roster.

Grogan Medal winner Frazer Neate has been upstaged by defender Chris Murphy in the Mt Gravatt best and fairest award.

Murphy, who coach Adam Boon says gets under the radar of rival clubs, won the Vultures best player trophy with 92 votes after a good season when the club ended up in fifth place, beaten by Broadbeach in the elimination final.

As expected, quality midfielder Neate polled well but finished on 73 votes after missing three games because of injury.

Andrew Smith, the top-level ruckman and club captain, was third in the count with 70 votes.

Boon said his vice-captain Murphy was Mt Gravatt’s most improved player running off a half-back flank.

“But he doesn’t get the recognition from the opposition that he probably should,” said Boon.

Ever-reliable defender Luca Winton is the new best and fairest at the Western Magpies.

The 22-year-old junior product from Sherwood edged out teenager Daniel Edwards, who is also a former Sherwood junior.

Winton, who was runner-up in the B&F in 2018, polled 80 votes and won by six from Edwards, who is only 18 and coming off his first year of senior footy with the Magpies.

Coming in third was veteran Gareth Crawford, who started the season off in the reserves.
The Magpies are closer to announcing their seniors coach for 2020, to replace Brydan Morgan in the position.

And the club is still in the process of a possible return to the era of being named Sherwood.

And the Magpies are still in the process of finding a replacement for coach Brydan Morgan, whose services were ter9nated after the club finished sixth for the third successive year.

A wonderfully consistent season has ended for Labrador captain Bryce Retzlaff with the Tigers’ best and fairest award.

The towering Retzlaff accomplished something very rare in QAFL after he topped the Tigers’ count with 152 votes, winning from defender Jayden Young (121) and Alex McKay and Dane Watmuff tied for third on 117.

Retzlaff’s season, when the Tigers finished seventh, was very impressive in that he played 15 of 16 games and managed to poll in every one of those 15 games.

This is something special in best and fairest counts and typified the value of the former Brisbane AFL player to the club where he started as a junior.

Former Adelaide Amateurs star McKay missed a number of games through the middle stages of the season but word from the Tigers is that Retzlaff would have topped the poll anyway.

The Tigers have lost veteran Wayde Mills for 2020 – he has retired – but coach Liam Burke said the club expects to re-sign a majority of this year’s players.

It was a disappointing season for the Wilston Grange Gorillas but it was one that ended positively for the son of a former Morningside star.

Lochlainn Gaw emerged as best and fairest for the Gorillas with 128 votes after a close contest with experienced club stalwart Daniel Farry runner-up on 122.

Gaw’s father Alastair played with distinction with Morningside in the heady days of the QAFL in the 1980s.

The 2019 season was not kind for the Gorillas, who won only three games under first-season coach Barry O’Brien.

O’Brien subsequently resigned at the end of the campaign and has been appointed coach of QFA Division 1 club Coorparoo Kings.

Ever-consistent key position utility Mitch Crawley has landed the Sandgate best and fairest medal after some tense moments at the club awards night.

Crawley ended the count with 90 votes after leading clearly half-way through the night.

But he had some anxious moments when eventual runner-up Jordan Maynard (76) started to receive a number of favourable envelopes.

Adding to the drama was the storming finish of last year’s winner Jordan Harding who made things interesting.
Another wooden spoon eventually led to Sandgate and coach Jarad Marsh parting ways and the Hawks are still in the process of finding a replacement for him.