PRIME MINISTER ON THE BALL 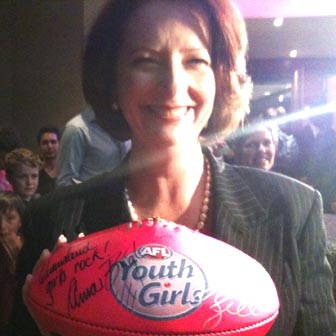 Even the Prime Minister of Australia has wished the Queensland Under 18 Youth Girls side the best of luck at the national championships in Melbourne next month.

Lions coach Michael Voss, netball star Vicki Wilson, teen solo sailor Jessica Watson and Channel 10 and Channel 9 personalities are among others to have sent messages of goodwill to the team.

The football embarks on a journey down the Pacific Highway shortly to reach Melbourne by 7 September, when the national youth girls under 18 championships start.

BYE COMES AT PERFECT TIME FOR TIGERS
LILLICO MAY DROP BACK