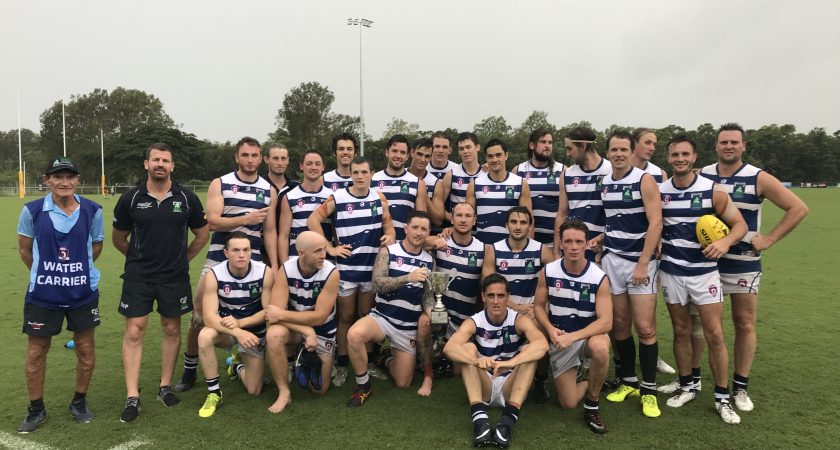 The Port Douglas Crocs showed on Saturday why they are widely regarded as one of the best regional teams in the state, when they accounted for the Townsville-based Hermit Park Tigers by 45 points in the inaugural NQ Premiers Challenge.

The battle of AFL Cairns and AFL Townsville 2017 premiers was scheduled to be the curtain raiser for the AFL’s Gold Coast Suns vs North Melbourne match at Cazaly’s Stadium, however persistent rain saw the match moved to the newly revamped Watsons Oval.

The match opened at frenetic pace with the visiting Tigers applying immense pressure to their more fancied opponents. and it wasn’t until the 22nd minute of the quarter that the Crocs registered their first score.

Led by new recruit and former Sydney Swans player, Brett Meredith, the Crocs stepped up a gear in the second term, piling on five goals to none and held a comfortable 33-point lead at the main break.

The third quarter belonged to the Tigers, as they rallied with three goals and outscored Port by nine points, trailing by four goals heading in the final term.

The class of the Crocs again came to the fore in the final quarter, holding the Tigers scoreless, whilst adding three more majors to their total.

Both teams performed admirably, however the reputation of AFL Cairns being the state’s premier regional competition was reinforced by a classy Crocs outfit.

There were plenty of standout performances on the day, with Port being led in front of goal by recruit Daniel Moore with five majors, while Adam Gross was busy all day and finished with two goals to his name, and Meredith was easily the best player afield.