PLAYERS BACK FOR TIGERS 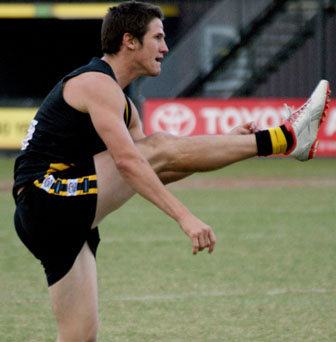 Labrador are hoping a swathe of top players will be available for selection for Sunday’s crunch game with Mt Gravatt at Cooke-Murphy Oval.

Labrador are hoping for a selection headache when the selectors convene tomorrow night, with a number of quality players set to return for Sunday’s big clash with Mt Gravatt at Cooke-Murphy Oval.

The most notable aspect of Labrador’s charge into second position has been their ability to keep winning despite making up to six forced changes to the side every week.

Four of their key players in the win over Morningside missed last week’s game at Redland, but the Tigers hardly missed a beat.

Coach Jarrod Field was hedging his bets about who exactly would be right to return.

“(Aaron) Shattock is a maybe, (Todd) Grayson probably a yes, (Spida) Everitt unsure,” he said. “(Mark) Reilly, (Jack) Self and (Luke) Licht are a chance.”

“We won’t be rushing Slattery and Talbot back into the seniors, but Thursday night could still be pretty hard,” Field admitted.

Mt Gravatt are set to welcome the return of crack defender Josh Vearing from a broken wrist, although senior coach David Lake will be missing due to international duties with the Papua New Guinea side.

Former State Under 18 coach and Vultures assistant Neville Miller will run the side for the day.