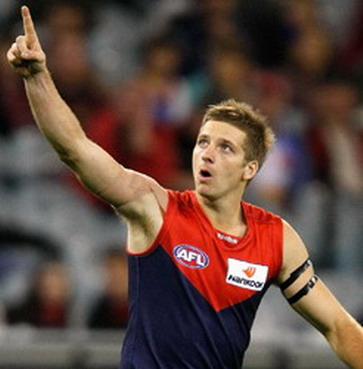 The AFL website reports that Gold Coaster Ricky Petterd has knocked back an overture from the Gold Coast to remain with Melbourne until the end of 2012.

The AFL website today reports that Gold Coaster Ricky Petterd has knocked back an overture from the Gold Coast to remain with Melbourne until at least the end of 2012
.
According to Matt Burgen on afl.com.au, the almost 22-year-old, originally from Broadbeach, has opted to stay in the red and blue, instead of potentially returning home to play for the 17th AFL club, which enters the competition in 2011.

Although the injured Demon did not directly speak to the Gold Coast, he confirmed the second Queensland team had made contact via his manager.

“Personally, no, the Gold Coast didn’t approach me at all,” Petterd told melbournefc.com.au.

“I think they had a little word to my manager, but I tried to stay away from that stuff.

“I just wanted to focus on staying here and getting my shoulder right first and then hopefully everything else just fell into place.”

Petterd said it was “a little bit” difficult having the Gold Coast speculation hover over him, particularly after he started the season in fine form, before his year came to a halt against North Melbourne in round six.

“It was more funny than anything, because I just loved hearing all the rumours and [people] saying I’ve already signed. In the end, I was just agreeing with anyone,” he said with a laugh.

“But to sign with Melbourne, it was something I wanted to do, because I love the club and I love the players and that’s pretty much the reason why I stayed.

Although Petterd remains a Queenslander at heart, he is very fond of Victoria.

“It’s a great place, but I always love home,” he said. “But to play football in Victoria for Melbourne, I don’t think there is much better.”

After impressing in the pre-season and shining with four goals against Collingwood in round two – although it ended in a heartbreaking one-point loss – Petterd said he gained a new found confidence, before his recent shoulder injury.

“I had a really uninterrupted pre-season, which was good for me, because I have rarely ever had one,” he said.

“I ended up having a pre-season, and the biggest thing I had was a cork.

“Stringing some games together and staying fit – I got a lot of confidence out of the players around me and they had a lot of faith in me and the coaches as well, so that was the biggest step for me.”

Now on the road to recovery, Petterd is back running and starting some strengthening skills, along with brushing up his AFL intelligence on opposition players.

“Strength wise, I’m still on the way and it’s not totally back yet, but it’s coming [along],” he said.

“I’m just doing projects on a lot of AFL players … that I might play a similar role to or against. It’s so I can learn a little bit more about the AFL and the players that play in it.”

Although drafted as a half-back/midfielder at No.30 in the 2006 NAB AFL Draft, Petterd has relished his time in attack, after assistant coach Josh Mahoney encouraged him to grab the defensive forward position a couple of seasons back.

“I find it a little bit more exciting and you get to run around – you’re not really dictated to and you dictate,” he said.

“Dean Bailey, at the start of the year, told me ‘we want you to use your attributes and we want you to run and jump at the footy and take them on’.

“As soon as he told me that, it was like a bit of a license to run around … and go for [it]. I took that on board and it worked a little bit.”