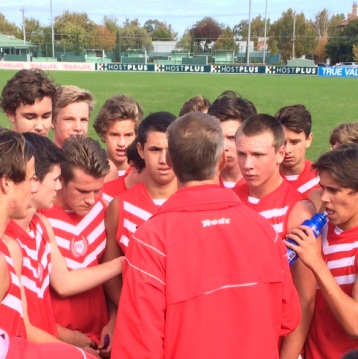 Played on the hallowed turf at Essendon’s Windy Hill, PBC held their own all day against their Victorian rivals to win 5.8.38 to 4.11.35.

Just a solitary point divided the schools at quarter time, with PBC playing some of their best football of the season.

In the second quarter, Catholic College Sale took back the reigns and went into the main break with an eleven point lead 4.3.27 to 2.4.16.

Coaches Neil Mackay and Chad Owens roused the boys at half time and sent them out for the second half firing.

Not to be out-muscled, the much smaller PBC boys took back the lead in the third quarter and went in to the final break one point ahead.

In a team containing five 15 year olds amongst their 16 and 17 year olds, it was always going to be a huge ask for PBC in a competition against schools with 17 and 18 year olds.

The last quarter was off to a flier with Sale controlling much of the play in their half of the ground for most of the quarter, but it was their inaccuracy in front of goal that was their downfall, kicking seven behinds.

PBC made the most of their chance with the ever reliable forward, Joel Smith, slotting a goal with five minutes left to give them a lead of five points.

The final minutes of the game was a series of frantic contests for the footy in Sale’s forward 50 with the pressure of PBC’s defence holding up to contain the home side to just behinds, with the final margin three points at the siren.

A remarkable achievement for the school who went in to the Premier League competition aiming to expose students to a higher level of football, and to educate them on where they needed to be should they one day hope to be drafted to the AFL.

But the school never dreamt of coming away with a win in just the first year of competing.

Ex PBC student and product of their AFL program, Joel Wilkinson, was on hand to give advice to the boys throughout the match, using his experience from playing with the Gold Coast SUNS the VFL to give the boys some tips.

AFL School Program Ambassador and Richmond FC Captain, Trent Cotchin, visited the boys following the match to talk to both teams and fielded many questions about life as a professional footballer and the rigours of being drafted.

To finish of their day in Melbourne, the boys visited Essendon’s new training base at Tullamarine, the True Value Solar Centre, and toured the state-of-the-art facility gaining an insight to how AFL teams train and prepare for each match and season.

With one win and one loss going into the third and final round, PBC will look to finish off strongly when they host Victoria’s Hallam Senior Secondary College at major supporter Southport Sharks, on Wednesday 28th May. Game starts 2:00pm.

NEAFL TV - Round 7
Strong start to the season for BBC