Palm Beach turn back the clock for Homecoming 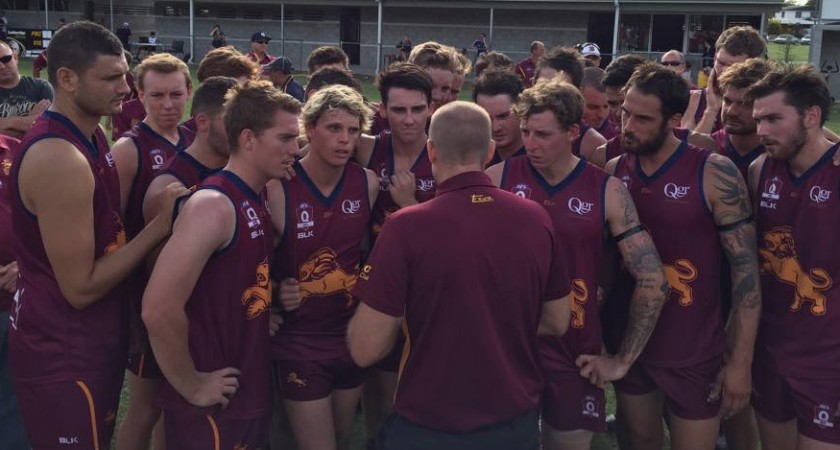 The Palm Beach Currumbin Lions have come a long way since the early days when players were collected from local surf beaches and pubs just in time for games.

This was just one of the memories that was evoked when the club came together to celebrate 150 years of AFL in Queensland.

In April this year former players of Palm Beach Currumbin and Surfers Paradise came together for a legends match and dinner at Salk Oval.

Anne Cornish, the Palm Beach Currumbin Secretary, said the event was a hit, sparking plans to make it an annual tradition.

“We picked the Surfers game because of the local aspect, and we invited legends and past players of both clubs to pull the boots on again and have a run around,” Cornish said.

“A few of them could hardly breathe coming off the field because they were so puffed, but they all had a fantastic time, and it was great to have them all in one room.”

In 1961 the club played its first game at Salk Oval on Sunday July 9.

For the history buffs, PBC, who were known as the Centrals and played in a purple and gold, beat Southport 64 points to 39.

Over the years the uniform evolved to include the Lion symbol and when the Brisbane Lions entered the AFL Palm Beach Currumbin adopted their maroon and gold colours.

Cornish was drawn in by the rich history of the club when she joined seven years ago.

“At the clubs 50th anniversary they produced a document with a bit of their history on it and I was amazed to learn that at the time they had only missed the finals six times,” she said.

It is this level of success that has drawn comparisons between PBC and a notoriously divisive AFL club.

“I guess we are a bit like Collingwood in a sense. You either love us or you hate us,” Cornish said.

Bert Willis, the inaugural club president, and Rollie Daniels, a local builder, were just two of the original volunteers who started the club and petitioned the creation of Salk Oval.

This culture of service has continued throughout the years and Cornish says the players at the club are extremely appreciative of the effort put in by volunteers.

“The club doesn’t function without the people who sacrifice their time week in week out, and have done right throughout the history of the club,” she said.

“That’s why it is so important to make sure we thank these people and I know that these players are so appreciative. Every week Coach Chad (Owens) makes sure the volunteers are thanked in the awards.”

After 14 rounds the Lions currently sit top of the QAFL ladder by 6 points with the best for and against percentage in the league.

“I’ve been here for seven years now, and this is the best we have been placed both on and off the field,” said Cornish.

“We are already well into planning for 2017, we have started discussing about the make-up of the committee, put future strategies in place, we are not treading water we are really moving forward.”