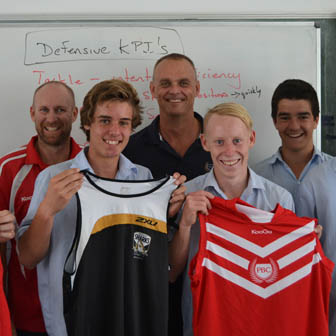 Launched in 2011, the Premier League offers a stand-alone school sport competition for Australian Football Boys’ teams. PBC are the first interstate team to participate in the competition and will join seven other Victorian AFL schools in May for a round robin series.

The competition is a golden opportunity for PBC to compete at a higher level and test themselves against other sports specialist and AFL Academy schools.

The 2014 format will feature eight schools, split into two even pools. Each team will play three games between late April and May, with the top two schools from each pool progressing to the semi-final stages. The Grand Final will be play at the MCG on July 26.

Neil Mackay, director of PBC’s AFL program, believes the players are ready for the challenge ahead.

“Over the last four years we have won consecutive Northern States Cups and we believe our program has matured enough to accept the great challenge on offer,” he said.

“It is critically important to the development of our players that they are exposed to the demands of a higher competition such as the Victorian Schools Premier League.”

The Southport Sharks have thrown their support behind Palm Beach Currumbin, agreeing to become a major sponsor during the competition.

“We are delighted that such a professional organisation such as the Southport Sharks has agreed to support our initiative,” Mackay said.

“Our philosophy mirrors that of the Sharks and the NEAFL competition.”

Sharks Football Manager, Jason Cotter, is excited to be involved with Palm Beach’s journey, confident the experience will be beneficial for junior development.

“We see this as a great junior development vehicle, so we are more than happy to be involved.”