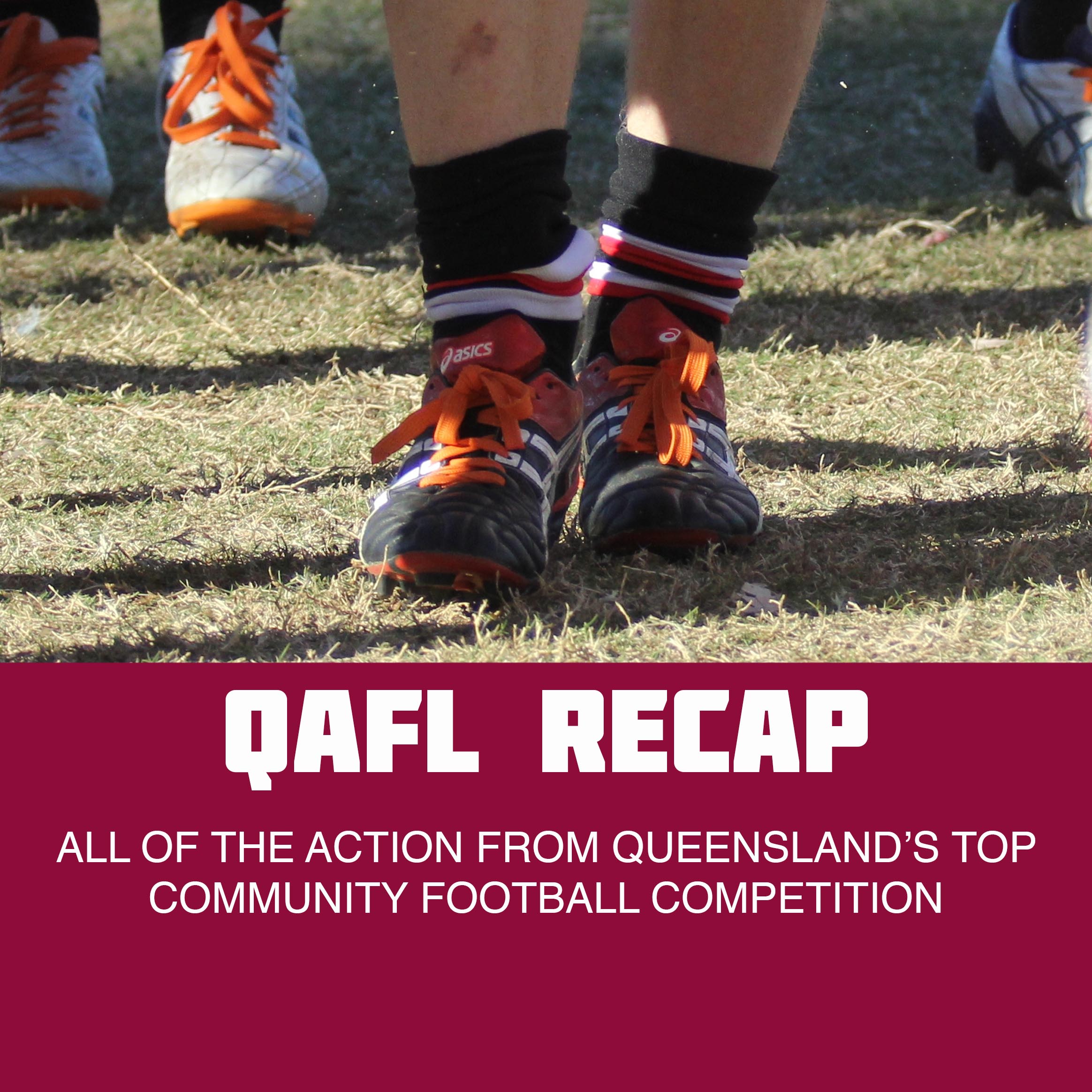 Morningside survived an almighty scare to stretch its unbeaten run to a 14th week, with a 37-point win over Palm Beach.

Sam Faure kicked the first of six unanswered goals in that term, followed by a 50m major from defender, Ryan Johnson, that really ignited the Panthers’ comeback.

Morningside’s leaders came to the fore in the last term, with Tyson Upton the best of the lot, kicking two goals in the final term and setting many more up.

Lachie Russ was brilliant all day for Morningside, continuing his superb run of form this season, kicking three goals and playing the most consistent game of the lot.

Lake said the game had provided a glimpse of finals football.

“For us, that’s a better win (than against Palm Beach in Rd 3) , because that’s reality,” he said.

Conversely, all that worked for Palm Beach in the opening parts of the match fell away, with their previously suffocating pressure loosening and allowing the Panthers the inch they needed to take control.

Lions coach, Daryn Cresswell, said too much was left to too few in the final term.

“I was disappointed with the way we capitulated,” he said.

In the last quarter we were waiting for (Jesse) derrick or (Todd) Bryant to or (Clint) Kelly to do it and it only takes two or three players not to play their role in the way we play and it’ll come undone real fast.

“They kicked the first couple and our blokes just went into their shell.”

Kelly was dominant in the Palm Beach forward line, finishing with seven goals.

See how this game played out live.

A 10-goal haul from Surfers Paradise’s Simon Fenton set the tone for a drought-breaking win at Chelmer on Saturday.

Fenton almost didn’t line up in the must-win game, under an injury cloud during the week, but Demons coach, Beau Zorko, was pretty happy that he did.

“We nearly pulled the pin because he is so valuable, but he pulled up well yesterday (Friday) morning,” he said.

“He’s taken a bit of time to work into the year, but he’ll be a very important player in the back end of the season.”

The Demons had a blistering start at Chelmer, with six goals to none in the first term.

Surfers Paradise captains, Ryan Dienjes and Regan Finlay were both pivotal in the win, while Connor Manning battled hard in the ruck after Braydon Preuss’ early exit with a possible groin strain.

“It was disastrous,”he said.
“The confidence was gone once that first quarter was gone and they got themselves back into it but the effort just wasn’t good enough.

“I think at the moment there are too many blokes who are happy to just turn up and play a game rather than jut turn up and win a game.”

The Magpies’ Dom Beer was dominant in those ruck contests, while youngster Tom

Michael was solid as well in the half forward line.

The win puts Surfers Paradise in sixth spot, only percentage out of finals, while the Magpies sit in eighth spot, heading into the bye, with Humphrey admitting it is likely the end of their finals chances.

Labrador controlled most of the match, but were forced to weather a late storm from the Vultures, who turned a six-goal margin into a 10 point game late in the third and closed to just four points midway through the last term.

Tigers coach, Steve Daniel, was happy with the way his side stood up to the Vultures’ challenge.

“We lost our way a little bit and dropped our concentration and they kicked five goals in eight minutes,” he said.

“I felt we controlled the game, except for that 10 minutes.”

Ryan Davey was once again his side’s best, but ended his day on the bench with a foot injury, while Mat Clarke and Tom Daniel were standouts on the halfback line.

Mt Gravatt coach, Brad Pollock was pleased with another strong show of character from his team, despite their efforts ultimately falling short.

“The boys just kept fighting back, it was a terrific effort,” he said.

“We certainly had our chances to win the game but I felt like Labrador were a little bit more experienced or composed when it counted.”

Redland-listed Jesse Green had an outstanding second half for the Vultures, while youngster Todd Carbone showed his versatility, playing on the ball.

Mt Gravatt will be sweating on the fitness of fullback Mitch Hart, whose season could be over after he suffered a possible broken ankle.

The Tigers are looking forward to the bye, with Davey, Todd Featherstone (groin) and Hugh Wadsworth (knee) all under injury clouds.

Grange coach, Matt Trewhella, said Brittain was an invaluable addition to the team.

“Even though he misses games, he is so professional with the way he’s trained that he’s always going to come in and make a difference,” he said.

“He’s an exceptional character, he led from the front…and to be able to have that captain there gives our players something extra.”

Matt Nickerson was the Gorillas’ best in the opening half, while Dave Kettle, Taylor McCubbin and Lee Smith were instrumental

The Gorillas’ win was a major confidence boost, and with other results falling their way, Trewhella is still optimistic of the seventh-placed side’s final five chances.

“If we can win most or all of the rest of our games, then it will probably come down to the last week or two,” he said.

“It’s still a goal for us to make that fifth spot.”

Trewhella was a late withdrawal for the Gorillas, with a calf complaint, but expects to be back after the bye, while Daniel Farry came off with a shoulder injury through the match.

Sandgate’s Adam Fry finished with two goals for his side, while Jarrod Andrews and Sam Gribble were the Hawks’ best.

It was an improved effort for Sandgate after a disappointing match against Morningside  a week ago and now they have a fortnight to prepare for their clash against Broadbeach.

Broadbeach leapt into second spot on the ladder, with an 85-point win over UQ.

The students were competitive early, keeping the margin to just seven points at quarter-time, in an effort far improved from the sides’ last clash, which the Cats won by 103 points.

Queensland U18 player, James Holland, was sensational in his debut game for the Cats, while Josh Searl continued his strong 2014 form and Andrew Siekai (four goals) stepped up to another level, the culmination of some steady improvement.

“He (Siekai) has probably slowly been building over the last month,” Cats coach, Wayne Petterd, said.

“It was promising, the fact he was leading at the ball and not trying to get everything over the back.”

Petterd, was happy with the win but said his side would look to replicate that second quarter more often.

“We blazed a bit (in that term) and used the ball well,” he said.

“We kicked nine goals in that second quarter and 12 in the rest of the game, so that was a bit disappointing.”

UQ coach, Matt Stewart, said his side could take positives from the match, but needed to build on its consistency.

“It’s good for the boys to know they’re improving,” he said.

“It’s just a matter of holding things for four quarters.”

The win puts Broadbeach in second spot, a game ahead of Palm Beach, with matches against Sandgate, Western Magpies, Palm Beach and Labrador.