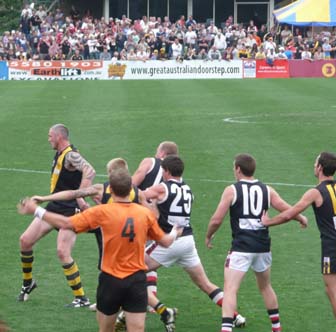 Morningside turned Labrador’s fairytale 2010 season into a nightmare with a stunning last quarter blitz that reaped back-to-back premierships for the proud Panthers at Giffin Park today.

Tall forward Kent Abey collected the Joe Grant Medal for a sensational display that included six goals, while midfielder Ryan Holman was not far behind with some prolific work at the bottom of the packs.

Labrador struggled through the opening half and were fortunate to be only 14 points behind at the main break.

They came out with all guns blazing in the third term, booting 6.5 to 1.6 to enjoy a healthy 15-point lead at the last change.

Given that Morningside’s fourth quarters had been their worst all season and Labrador’s their best, it was no surprise when Tim Notting burst away from a pack to extend the lead to 20 points at the two-minute mark of the final term.

It was Notting’s fourth goal of the game and had the majority Tigers’ crowd in full cry.

Morningside’s spirit is never broken and three goals in as many minutes had them right back in the contest.

Labrador appeared to have steadied when Abey was gang tackled running at goal from 35m and his kick fell short, only to be rebounded to the other end for Notting and Mark Reilly to set up an easy Todd Featherstone goal at the 10-minute mark.

Abey, who had taken a super pack mark and goalled in the early rush, read the ball cleverly off a pack two minutes later to kick his sixth and the game was right back in the balance.

Five tense minutes of end-to-end football followed before the Panthers got a break when apparent front-on contact was overlooked on the wing and the spillage was rushed forward for Mugavin to kick a clever goal.

Five more minutes passed as both sides sought to gain the ascendency when Alastair Nash won a free kick at half-forward and verbal abuse towards the umpire resulted in a 50m penalty.

The Tigers completely lost their composure after that and gave away a string of free kicks, resulting in two more goals in as many minutes for the Panthers to ice the game.

The storming finish came largely about from Holman and Paul Shelton’s work in the middle, with Tyson Upton and Damien Bonney also chipping in with some clean centre clearances.

They were given plenty of momentum by teenage ruckman Tom Hickey, who in all likelihood rubber-stamped himself a spot on an AFL list with his final 20 minutes.

He produced some clever rockwork, took a particularly timely, strong mark in the middle of the ground, and worked well in defence when required to play a key role.

When the ball did go forward for Labrador, it was quickly rebounded out by Sam Brown, who again went to half-back after halftime and played a pivotal role in his team’s success.

Everything that could go wrong for Labrador did.

Their best hard-ball winner Shane Paterson injured his hip just before quarter-time and while he tried to come back on, could have no impact.

Compounding his absence was the job that Nash and his teammates did in keeping the dangerous Jason Howard under wraps.

They punted on bringing in three players who had been out of the team for the past month – Nick Stockdale, Emmaus Wartova and Michael Doyle – and each was cramping in the second half.

Stockdale was superb for the first three quarters at full-back, but was eventually sent to Abey after Aaron Shattock – who had bettered the Panthers’ co-captain in the previous two meetings – could not contain him.

Abey not only kicked goals, but he provided a constant marking target across half-forward or further up the ground.

He had a valuable ally alongside him in Austin Lucy, who was particularly busy early and played his part in the six-goal-to-three second quarter.

Labrador’s best player in the first half was giant ruckman Trent Knobel, who was outstanding at the hit-outs and with his marking around the ground.

Knobel continued to be prominent until the last quarter hour.

Holman would have collected a dozen possessions in the first quarter, while Shelton was busy throughout the first half.

Morningside chose to bring in former skipper David Lillico in the place of the experienced Nick Clark and while he had only limited time off the bench in the first three quarters, was busy in a forward pocket when the game was up for grabs in the last term.

Damien Bonney was tagged by Curtis Allen as expected as while not overly prominent, won some key possessions.

Jarrod Price had his hands full with Peter Everitt at full-back in the first half, with the big ‘Spida’ taking two particularly impressive marks and goalling, but Price was able to hold him thereafter.

Morningside did have problems at centre-half-back, where Russell Alleway outmuscled youngster Tom Bell.

Alleway was one of his side’s better players, which was no mean feat considering Bell had been one of the form defenders of the finals series.

The most intriguing battle was that between Notting and Aaron Rogers.

Both did some wonderful things for their respective sides, with Rogers running down the ground to kick a long bomb goal in the second term after Notting performed various magic acts to conjure his goals.

Labrador’s tactic of negating running half-back Nathan Kinch with Elliot Bath was a success again, while Steve Wrigley played a key part in the third quarter turnaround with his work across half-forward.

He eventually was sent back to help in defence midway through the last term and was solid, but could not stem the flow.

Like Hickey, the talent scouts could not have been anything but impressed with his impressive four-quarter performance.

Todd Featherstone was prominent with some speedy work in the midfield capped by three goals, but even he was overwhelmed by the Panthers at the finish.

The game was a wonderful way for Panthers ruckman Jacob Gough to retire, having played through the finals with a fractured rib and cartilage damage.

Coach John Blair became the most successful mentor in Morningside history with his fourth premiership in charge, breaking a tie with triple premiership coach of the 1990s Marty King.