On the hunt for multicultural talent 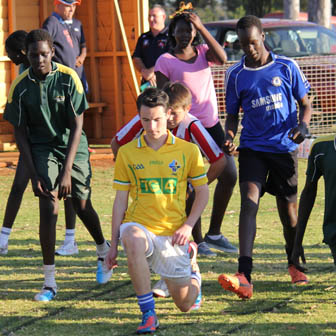 Could you be the next Majak Daw or Bachar Houli?

AFL Queensland is inviting young athletes from all ethnic backgrounds to test their ability at our next multicultural AFL combines; at Yeronga on Saturday October 5 for Brisbane participants and at Metricon Stadium Saturday October 12 for Gold Coasters.

The session is open to males and females aged 13 to 17 from multicultural backgrounds and no AFL experience is necessary.

Tests on the day include agility, vertical leap, 20 metre sprint, handball and kicking.

AFL Queensland Diversity Manager Brett Fragiacomo said the combine gave young athletes an opportunity to see if they had the skills required to make it as an AFL player.

“The tests we do measure the key skills required to play AFL so even if an athlete has never played AFL before we can still assess their suitability for the game.

“This is particularly important for young people from multicultural backgrounds who may not have had the opportunity to play AFL before.”

Participants who perform well at combine will be linked into the AFL Queensland Multicultural Talent Pathway listed below.

Testing kicks off at 10am on October 5 at Yeronga’s Leyshon Park and will finish at around 1:00 pm.

For the Gold Coast Testing kicks off at 10am on October 12 at Metricon Stadium and will finish at around 1:00 pm.

Taking you around footy grounds across Queensland. This week we’re heading to Neil French Oval,Townsville. Yesterday, saw the 8th running of the Garbutt... [more]

As part of Sir Doug Nicholls Round and our Racism. It Stops With Me education sessions, we engaged Matt and Ambrose from Ngalin Ayeye to design and make... [more]