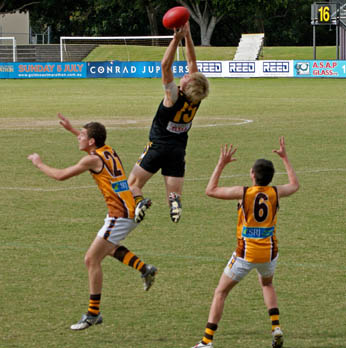 Former Collingwood star Shane O’Bree will make a one-off appearance for the Gold Coast Suns in tomorrow’s opening round of the NEAFL Club Aid Trophy pre-season competition at Labrador.

With the Suns short on players for their reserves team, assistant coach O’Bree – three days short of his 32nd birthday –  has been given special permission to help out.

The Suns play the final two games of the southern division against Broadbeach and Labrador late tomorrow afternoon.

Southport have named livewire rover Matthew Payne in their squad despite the former Grogan Medallist having been rarely seen at Sharks training over summer.

The Sharks are set to unveil ruck recruit Daniel Weymouth, who has impressed all at Fankhauser Reserve with his ability.

The Sharks play a Gold Coast Scorpions Under 18 outfit first up before confronting Labrador.

Former AFL midfielder Matt Shir, a star in his first season with the Hornets, is unlikely to play during the pre-season for personal reasons.

But Aspley will still run out a strong midfield brigade for their northern division matches at Victoria Point.

Mount Gravatt will get some match practice into a number of their recruits when they clash with Redland in what looms as the marquee match of the day at Colburn Avenue at 1.30pm.

Among a raft of quality recruits, young Vulture Sean Yoshiura returns after a season as a rookie list player with the Brisbane Lions.