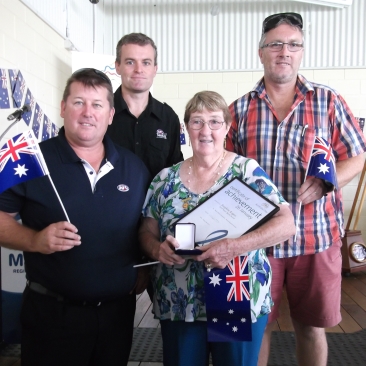 Mackay’s Josie Rogers has been rewarded for her contribution to AFL.

One of AFL Mackay’s most beloved volunteers, Josie Rogers, was recognised for her contributions as part of this year’s Australia Day honours.

Rogers, affectionately known as the “Matriarch of Mackay’s AFL community”, has been awarded an Australia Day Senior Sports Award as well as an Order of Australia Medal for her services.

Since becoming a member of Eastern Mackay in 1974, Rogers has become a fixture of the Mackay AFL scene, filling numerous roles in the four decades since.

Her impact on the club has since been recognised with the Swans’ home ground, named Rogers Oval after Josie and her husband, Mick.

Currently the AFL Mackay secretary, Rogers has made an indelible mark on the footy scene with life memberships at three different clubs.

Rogers said she was totally humbled by the prestigious honour.

“I was so overwhelmed when I first received the letter from the Governor- General office (advising about the award),” she said.

“I had to read the letter a few times before I could accept that it was me that they were referring to.”

The day Rogers received the award was made even more significant for her  when it was shared with another special sporting moment.

“I received this second letter to confirm that I would be receiving this award on the same day that Australia won the third test in Perth which made it even more special,” she said.

“I could understand how proud Michael Clarke was feeling at that time.”

Rogers will receive her Order of Australia Medal later this year, at a ceremony in Brisbane.