‘Nothing changes’ for UQ despite new division 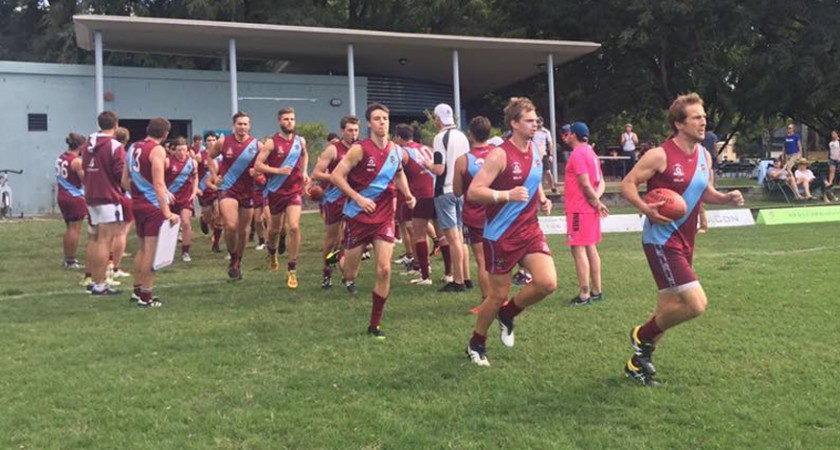 They might be lining up in a different division next year, but the focus is still the same for UQ.

Moving from the QAFL into the QFA Division 1 for season 2017 hasn’t changed the Red Lions’ outlook, with finals footy ticket item number one.

“Making finals is our number one focus for us across all teams, men’s and women’s, but the other is controlling the controllables. One of our goals is to gain recognition with either UQ Sport or AFL Queensland for being the best run and organised club. That’s something we are working towards, because it is independent of the performance on field,” UQ President Ben Coombs said.

“Nothing changes from our point of view in terms of what we are looking to achieve. We are still striving for high performance and we will work, behave and train as if we are still at QAFL level. In terms of the goals which we set before the change in competition, which was to make finals across all teams, that also stays largely the same, as does maintaining our vision to be the home to smart footballers in Queensland.”

For that to happen, the first item on the agenda was making sure the majority of the group was still along for the ride, both playing and coaching wise.

“We have managed to maintain the vast majority of our list including Phil Lovett, Seany Powyer, Rhys Tadgell and Jonno McAnawai who performed well all year, as well as attract some old heads back, like Jarrod Prakelt, Jared D’Roza and Louis Straker, we are in talks with a few other good players to come and join the club,” Coombs said.

“John Tootell is a very good coach, so retaining him was extremely important. He probably didn’t get the support he deserved this year, but we have committed to him that we will provide that, appointing Tim Mackinley as Director of Footy is a big part of that support. We will also have brand new facilities throughout the course of next year. Which is a massive win for everyone.

“John is also firmly focused on winning flags. He isn’t sticking around to come second; he is focused on winning premierships. We are lucky to have a guy of his caliber, and it was really important to keep continuity in that coaching area.”

Off the field, the Red Lions have gone through a major shake up.

“We have restructured and reorganized ourselves at a club leadership level. I talk a lot about the club traditionally being heavily reliant on too few to do a lot of the work. Now, we are working to be far less reliant on far more people; scoping our roles for volunteers so they are a lot more manageable, making sure that their role is really defined, valued and there are accountability points, so we drive that success culture right the way through,” he said.

“We have got female representation at the leadership team level, in fact half our club leadership group, which is fairly unique to UQ. Everybody, from both sides of the club, has buy in and has a say, which is fantastic.”

So what about 2017? What are they hoping to achieve, and what can we expect?

“We are under no illusions that it is a very tough competition. We came through the Pineapple Cup into the QAFL very quickly, so we recognise QFA Div 1 is a very strong competition, with some great clubs and great rivalries to be reignited, we are confident we will be competitive,” he said.

“Our goal is to take it out, we have not won a senior flag since 1985, we are due. That’s where the dial has shifted from our point of view.”

“I think you can expect very committed, unified and excited teams next year. This provides a real opportunity for our teams to bring a winning culture across the club, and that’s going to be at the forefront of everyone’s mind.”