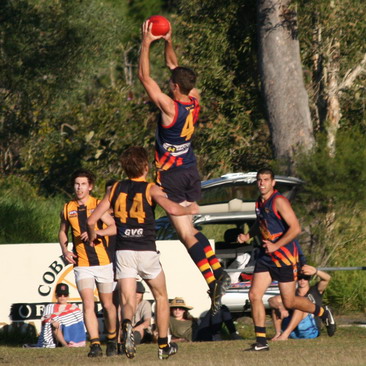 The Sunshine Coast species of the Tigers saw off the Brisbane species of the Tigers by 25.10 (160) to 11.7 (73) and completed the assignment without any injury concerns.
The defending premiers earned next weekend off when the qualifying and elimination finals are being played and will head into a home second semi-final with a full list to choose from with the availability of ruck duo Peter Trompf and Ryley Buntain, who both missed the weekend clash.
“We had no injuries, we just rested a few blokes who were a bit sore – but there’s nothing serious,” said coach Wayne Fletcher.
Noosa led by only five points at quarter-time, but then put on a show of class and midfield strength to add 9.5 to nothing in the second term and 7.4 to 2.4 in the third.
Half-back and wingman Todd Panaho brained Mayne in a super performance to be Noosa’s best, ahead of class midfield duo Luke Brauer and Lucas Matthews and rover Caleb isles.
Mayne teased their supporters yet again by outscoring the visitors by 6.1 to 5.0 in the fourth quarter, giving every indication they are a much better side than this season’s miserable record suggests.
It has been a case of a win is just around the corner for Mayne all season but unfortunately for the Tigers, there is no next weekend this time and the club goes into mothballs on the back of a winless season.
“That’s just about hit the nail on the head,” replied player-coach Luke Faulkner when asked about the performance and his team’s frustrating season.
“We just have these lapses in the middle of the game. I don’t know what it is, but we seem to lose concentration on what we’re doing.
“Still, I’m proud of the boys for outscoring them in the last quarter.”
Mayne had full-back Matt Jones as their best, Faulkner was also up there in player ratings and ruckman Luke Radonich tried hard.