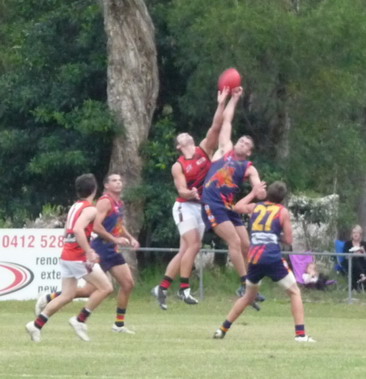 NOOSA continued their absolute dominance of Gold Coast rivals Burleigh with another big win over the Bombers at Weyba Road on the Sunshine Coast on Saturday.

TALK that the Western Magpies would struggle in their return from State League has certainly been misplaced if events at Salk Oval on Saturday night are any indication.Back from two seasons in the QAFL, the Magpies, 2008 Pineapple Hotel Cup champions, have started life back a division in style with back-to-back wins.In round one they beat Maroochy-Northshore, but on Saturday night they claimed a major scalp when they beat Palm Beach-Currumbin by 27 points – and in the Lions den to boot.The result definitely indicated the Magpies are back in business after two bleak seasons in the top division.All other games produced lopsided results.Noosa smashed Burleigh up on the Sunshine Coast; Sandgate did a demolition job on Springwood at Lemke Road; Wilston-Grange downed Coolangatta by 41 at Hickey Park; and Maroochy-Northshore had a horror day on the Gold Coast against Surfers Paradise.

Slick Magpies make it two in a row
THE Western Magpies are off and running – literally.
Season 2008 premiers, the Magpies downed Palm Beach-Currumbin in a free-flowing spectacle under the Salk Oval lights on Saturday night to prove beyond a shadow of a doubt that talk of them struggling back in second division was way off beam.
The Magpies took the clash by 22.8 (140) to 17.11 (113) in a match PBC coach Craig O’Brien described as the fastest he had seen at this level.
That word fastest tells us something about the Magpies because it is their pace and swift movement of the ball that has rocketed the club to successive wins after two winless seasons in the QAFL.
It is obvious that to beat the Magpies this year, opposition sides will have to run, and run, and run.
Coach Peter McClennan was in a buoyant mood after the match, admitting he knows little about opposition sides in the competition but with clear intentions of sticking to an exciting brand of flowing football the Magpies have produced in two starts this year.
“Palm Beach jumped us and were five goals up in the first quarter,” he said. “We were a little slow adjusting.
“But by the fourth quarter I thought our fitness ran all over them.
“It was a total team effort and our stats showed our defence moved the ball quickly – and we had 10 goalkickers as well.”
His rival O’Brien was far from unhappy despite the result being the second loss in a row for his side.
“We’ve played all right against two very good sides,” said O’Brien of the losses to Noosa and the Magpies.
“They (the Magpies) were good, but we were good too. It was a great game,” he said.
“In the end they just had too much run for us, but we’re not far off it.”
It was a 10-minute period in the third quarter when the Magpies put the Lions away, yet the home side still fought it out and O’Brien said better kicking for goal may have turned things around late.
“We kicked points in the last quarter, they kicked goals,” he lamented.
The Magpies had any number of good players, none better than half-forward Jack Parkes, midfielder and half-forward Val Pope and wingman Billy Moorhead.
Palm Beach had veteran defenders Damien Lyon and James Drake as their best while zippy Matt Carroll, who has the necessary pace to go with the Magpies, was also good.
But a quad strain late forced him off the ground, leaving the Lions with some concerns as they seek that elusive first win of the season in a fortnight.

Burleigh again leave Noosa empty-handed
NOOSA continued their absolute dominance of Gold Coast rivals Burleigh with another big win over the Bombers at Weyba Road on the Sunshine Coast on Saturday.
Noosa toyed with Burleigh after quarter-time on their way to a big win, kicking 17.15 (117) to 6.5 (41). The Tigers restricted the visitors to only four goals after the first term.
It was just another poor road trip for Burleigh, who have now lost four in a row at Weyba Road by margins of  108 points(2010), 10 points (2009) and 69 points (2008).
“The first quarter was even,’ said Noosa coach Wayne Fletcher. “But from about midway through the second term we took control.
“Burleigh came out to play and were good early, but I was pretty happy with the way my players stood up to what was thrown at us.
“I thought our pressure wore them down.”
Especially pleasing for season 2010 premiership coach Fletcher was the way some of his newer players have slotted into the side.
With physically strong forwards Danny Brewster (5) and Dayne Frew (3) among the goals again, the Tigers have extra potency up front.
“Our backs did their job, the mids (midfielders) have worked well and the forwards have done the job by kicking a winning score,” said Fletcher.
Brewster, especially, has proven to be a top buy by the Tigers. The Victorian country recruit has kicked five goals in each of his first two matches with theh Tigers and, late in Saturday’s game, had a run in the middle, indicating he has mobility to go with his aerial skills.
Noosa’s best was Jason Boydle, last year’s premiership full-back, who dominated at centre half-back against the Bombers.
Diminutive rover Caleb isles chipped in with three goals and Lucas Matthews was again constructive in the centre.
Burleigh coach Zane Doubleday said his Bombers were competitive for only ‘a quarter and 10 minutes’ and was frank in his summing-up.
“We’re a long way off, definitely,” he said. “There is no defensive side through our midfield and we made some bad decisions.
“It was disappointing because at quarter-time we were really in the contest.
“Our midfield just didn’t fire at all.”
Doubleday said there will be four definite changes to his side for next round.
“But maybe up to eight on that performance,’ he said.
One of those changes should be goalsneak Nathan Sullivan, who missed the weekend after rolling an ankle at training on Thursday night.
Burleigh were best served by Nick Atkins, who did well on Lucas Matthews up top half-time before being switched to half-back.
Matt Jamieson also made a big statement playing as a half-forward. It was at Weyba Road two seasons that Jamieson badly broke a leg. This is his first season back since that horror day.

Gorillas in the mix
RESURGENT Wilston-Grange made it two wins in a row under new coach David Martin when they beat Coolangatta by 51 points at Hickey Park on Saturday.
The Grange led by only a goal at quarter-time but kicked right away after that to win by 18.17 (125) to 10.14 (74).
In what Martin described as ‘an ugly game’, the Gorillas played in dribs and drabs, mixing style with the ordinary, perhaps the aftermath of a tough round-one win over Sandgate.
“I thought we were a bit flat through the week and we played in spurts,” he said.
“But it’s only round two, isn’t it. I feel we have a fair bit of improvement in us.”
Coolangatta pushed numbers back in the first quarter and this forced the Grange into errors. But once the game opened up after that, it was all one-way traffic.
New Coolangatta coach Neil McKay was disappointed by the Blues’ first-up effort – they had the bye in round one – but took plenty of positives from the match.
“In the second quarter they (Grange) kicked six and that’s unacceptable,” he said. “ But that was really only the second half of that quarter.
“We got smashed seven to one in stoppages in that period.”
That broke the back of the Blues.
“In the third quarter we had plenty of footy but couldn’t put scoreboard pressure on them.
“But, considering how many we had out, and apart from that meltdown, there were some promising signs to come out of it.”
The pick of the Gorillas were Brendan McGrath on a half-back flank, wingman/half-forward mark Skuse and Elliot Hohenhaus in the midfield.
For Coolangatta, forward and on-baller Ricky Whitehead (four goals), skipper Daniel Hawkins in the centre and rover Jake Byrush stood out.

Hawks find extra forward potency
SANDGATE player-coach Ben Long is an instant fan of new forward find Shayne Etherton after he kicked six goals in a landslide win over Springwood at Lemke Road on Saturday.
The Hawks took the match by 23.11 (149) to 7.8 (50).
Etherton is a virtual walk-in at the Hawks but may well prove to be the ‘rookie’ of the season. Long certainly is a big wrap on his new player.
“He is a bit of talent,” said Long of his centre half-forward.
“We presented well and led well and he took the pressure off Brendan Forbes (six goals).
“And when we have Josh Walker (four goals) floating across the half-forward line, it gives us some potency.
“And Dan (Danny Dickfos) will come back into the mix. With those four and others to come, we’ve probably got the best forward structure in the competition.”
Etherton is a former Kenmore Bears player who had been in Aussie rules for only three years before having last year off.
He turned up at Sandgate after good mate Trent Fuller suggested he have a run at training.
As the final scoreboard indicates, the Pumas were never in it, save for the first quarter and a bit. Coach Paul Opbroek described the effort as ‘pretty ordinary’.
“They just ran and were a lot cleaner with the football – and really good in contested marks. We got killed in the air basically,” said Opbroek.
“We were pretty ordinary, I thought, but we’re young and I suppose we can only jump back on the horse.”
Sandgate had Etherton, Walker and centre half-back Michael McCoy and their best while for the Pumas centreman/forward Michael Grose, Angus Hubert on a wing and ruckman Tiger Monk were best.

Wayward Demons way too good for the Roos
THE son of Surfers Paradise’s last premiership coach turned in a stylish first-up seniors performance for the Demons in their runaway win over Maroochy-Northshore at Sir Bruce Small Park on Saturday.
Bronson Durack, son of 1998 flag coach Brian, kicked five goals at full-forward as the Demons rolled the Roos by 15.25 (115) to 5.9 (39).
Durack was one exception to the norm on an afternoon of woeful kicking for goal by the home side, who could have won by a much bigger margin.
“They played really, really well and thank goodness they kicked for goal as badly as they did,” noted Steve Williams, Maroochy’s football manager.
While Durack kicked well, the opposite applied to another son of a Surfers legend.
Young Sam Folan, son of Surfers team of the century full-forward Gavin, kicked 3.10. But he still did more than enough to get a [place in the best three players for the Demons.
Vice-captain Sean Atkinson was the third after another impressive display on a half-back and wing.
Missing the physical presence of key position trio James Page, Ty Morrison and Callum Lowe, Maroochy conceded an 8.4 to 1.1 lead at quarter-time and still had only one major on the board at three-quarter time.
“We were very ordinary and we went backwards from the previous week,” said coach Roger Delaney.
best for the Roos were 17-year-old on-baller Declan Magill, Shaun McKenzie at half-back and Jarrod Raun in the centre.