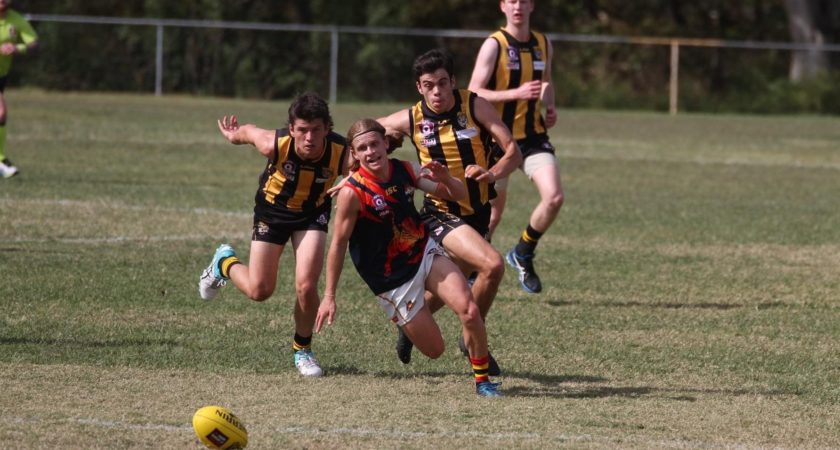 The Noosa Tigers will be chasing a trifecta of premiership wins this Sunday at the Moreton Bay Central Sports Complex when their senior men, reserves and women all vie for premiership glory. Standing in their way will be Mayne Tigers in the men’s space and Hinterland in the women’s clash.

Noosa and Mayne met only three weeks ago in round 9 of the QFA D1 Hart Sport Cup and nothing could separate the two competition heavyweights, with both teams registering 10.7 when the final siren sounded.

After two consecutive Grand Final losses to Maroochydore, Noosa broke through in 2019 to claim the mantle of QFA D1 Hart Sport Cup premier and no doubt they will be keen to make it back to back titles as undefeated premiers. They certainly don’t lack talent. Jai Fitzpatrick is bona fide star of the competition, while emerging NEAFL player Will O’Dwyer plays well beyond his years and what his gives away in height he makes up in skill and swagger. He could well be the difference in the game if left to roam loose around the forward the line.  Former Sydney Swans player, Brett Meredith, is a smooth mover in the midfield and he doesn’t need much of the ball to wreak havoc, while Jack Harper has been a handy acquisition to their already potent forward set up.

Mayne like to fly under the radar. It’s in their DNA. But they boast a talent across every line. Returning NEAFL players Jasper Craven, Jack Coghlan and Jamie Ivers are match winners, while Zac Mclean has relished his move forward by leading the competition’s goal kicking table.  Marcus Dyson has had a big week, winning the Duncanson & Todd Medal for the Best & Fairest player in the comp. He will no doubt be keen to add an extra medal to his newfound collection on Saturday night.

Both teams will be keen to control the tempo on the big ground at Burpengary. The team with the legs to run out the game in the final stanza may well be the determining factor in who steps up to the dais to hold the Hart Sport Cup aloft.

Noosa will back in their plethora of big game players to get the job done, while Mayne like do it by committee. Who prevails is hard to predict, but if the Noosa midfield brigade are allowed to roam free, they could be hard to chase down! But if there’s any team that can stop the Noosa juggernaut in 2020 its Mayne. One thing for sure the Tigers will be premiers in 2020!

In the reserves clash not much has separated the two teams all year with Mayne getting the bragging rights last time they met in round 9. Both teams boast some experienced players who could comfortably hold their own at senior level. This should be a cracking undercard to the main event. Who goes the distance? Time will tell. But the knockout blow may come very late…watch this space!

Despite 2020 being their first foray into women’s football, Noosa have only dropped one game in their debut QAFW year. Interestingly that loss was at the hands of Hinterland. While Hinterland’s only slip up for the season was to Ipswich.

The form line says there isn’t much between the two and both will go in expecting to claim the QFAW D2 North title. Both teams are stingy in defence, with Noosa only conceding 75 points for the season, while Hinterland were even more miserly with only 63 points scored against them.

The punters can’t split them, with experience on the side of Hinterland, while enthusiasm and a club culture of winning holds the Tigers in good stead.

Tigerland is buzzing after a sensational off-season in recruitment on and off the field. The biggest off-field recruit for Labrador being new Head Coach Nick... [more]

Mixing experience and youth will be the focus for the Demons in 2021 as they look to put season 2020 behind them and return to the form that saw them raise the... [more]

New Senior Coach Tony Lynn has seamlessly returned to Dittmer Park after captaining the Vultures premiership team to victory against Southport in the 2002 QAFL... [more]

There’s still quite a buzz around Jack Esplen Oval after the Panthers 2020 QAFL premiership glory. Coming into the match as the underdogs, Morningside walked... [more]