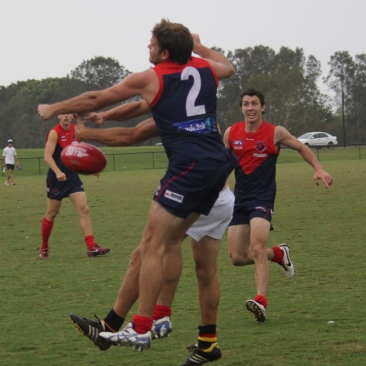 Plenty of elements of footy can be quantified.

The number of games someone’s played, how many goals they’ve kicked, how many disposals they have but experience is  one aspect of footy that simply can’t be reduced to a number.

Surfers Paradise’s Simon “Noisy” Fenton will play his 250th match this weekend, but that number doesn’t go anywhere near describing the impact has had on the Demons over 14 seasons coach Beau Zorko said.

“It’s priceless. We’ve got a few players, and Noisy’s one, who are the elder statesmen of the club, and the experience and football knowledge they bring to the table is priceless,” he said.

“His contribution has been nothing short of outstanding and I think from the club to Noisy we thank him for that.”

Originally from Shepparton, Fenton arrived at the Demons in 2000 and has stayed loyal ever since, including a seven-year stint as club captain.

A fair bit has changed in his career, with Fenton saying recovery hadn’t even been invented in his early days, but the veteran is still one of the Demons’ most consistent players.

Reflective of his nature, ‘Noisy’ was reluctant to pump himself or his career up too much, speaking ahead of his milestone match, but reinforced his team-first outlook.

“It means a fair bit to reach the milestone and my friends and family will be there,” he said.

“But it’s just an important game for the year.”

Fenton’s humility has earned him much respect around the Demons club, and the wider community footy circles, and Zorko said the veteran’s willingness to do his bit for the team never rang more true than when his coach switched him to defence.

“Last year, we went through a bit of a flat patch and asked him to make a positional change for the team dynamic and to this day he’s still playing in that position,” he said.

“He’s done a lot of important things at critical times in games for us in my time at the club that have contributed to team success.”

While Fenton is a more reserved character, he says he’s “not really a ranter or raver”, when he does say things on the field, Zorko said they have obvious impact.

“Noisy’s one of the quieter guys, but he’s the kind of guy who will go and have a whisper in one of the younger guys’ ears on the way back to the centre and you see them brim with confidence afterwards,” he said.

“That reiterates the words of him being the highly respected member of our club.”

Over such a long time, Fenton counts Luke Pridmore, who he played more than 150 games alongside, and former captain Jason Chandler, as his major influences.

At 33, Fenton doesn’t look like slowing down, but he said he hadn’t thought much about his future.

“Haven’t really thought – want to finish this year and take it from there,” he said.

“I’ve been pretty lucky with injury and I just love the game and I do everything I can to try and get up for each game.”

If he does choose to kick on in 2014 and beyond,  Zorko would be more than happy to keep  Noisy as long as possible.

“With the way he’s going at the moment, I’d love him to (keep playing).

“He is a consummate quiet achiever and a professional in the way he prepares himself. There is nothing stopping him from going on again next year and beyond.”

Surfers takes on Grange in a high-stakes clash at Sir Bruce Small Oval on Saturday, with a top-three spot up for grabs for the winner.