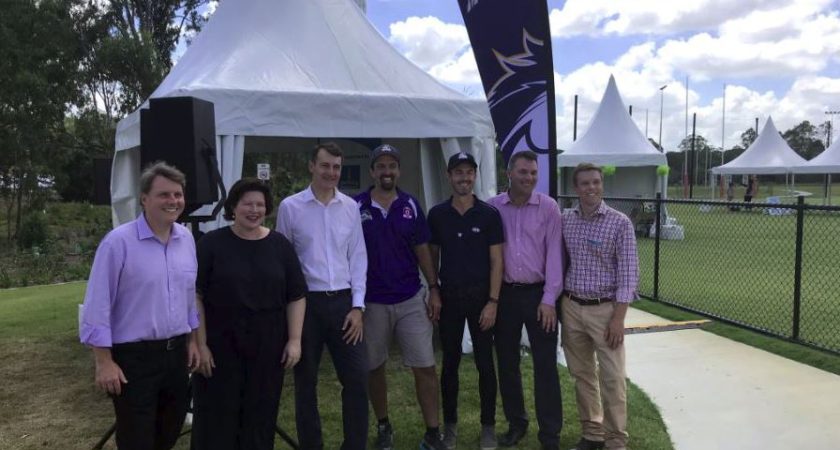 The new $15 million sport complex was funded by a $1.5 million contribution from the Queensland Government and $200,000 from the AFL Community by way of the Australian Football Facilities Fund, balance funded by Council.

Two Australian Rules ovals, which will be shared with cricket at the venue, are included in the Moggill District Sports Park which also features facilities for tennis and netball.

“Moggill District Sports Park is a magnificent new civil asset and provides the first new AFL ovals in Brisbane City for over a decade,” he said.

“The Sports Park will facilitate the further growth of junior and youth football in Brisbane’s western suburbs and help to accommodate tremendous growth in schools and female football participation.

“AFL Queensland thanks Brisbane City Council, led my Lord Mayor Graeme Quirk and Cr. Kate Richards for their vision and support with the project, which has taken six years to proceed from concept to reality.

“We invite families living in Pullenvale Ward to get involved with the Moggill Mustangs footy club and make the most of this significant new parkland.”

The opening of the sports complex comes in timely fashion for junior club Moggill Mustangs.

The Mustangs, who enter the ninth season in 2019, will now call the Moggill District Sports Park home after lacking a proper home, including no goal posts, since their formation in 2011.

The two-oval facility will enable the club to grow their membership further across the Moggill-Bellbowrie-Karana Downs catchment.

The proximity of the site to the Moggill ferry may also provide a participation opportunity for residents living across the Brisbane River.