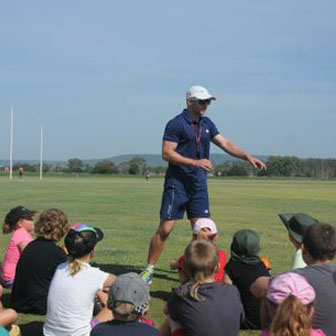 That is why he has jumped at the chance to be part of the code’s marquee women’s event.

Neumann was named as assistant coach of the Western Bulldogs for their exhibition match against the Melbourne Demons at Etihad Stadium on June 29.

It will be the second time the women’s game has been played as a curtain-raiser to the AFL clash between the two clubs.

Neumann is leading the push for more female footy on the Darling Downs and was senior assistant coach of the Queensland under-18 team at last month’s Youth Girls National Championships.

He was also invited to be part of the High Performance Academy in Melbourne in January but expected the women’s AFL game to be his toughest coaching assignment.

“It’s a fantastic opportunity to be at the AFL level,” Neumann said.

“I’ll head down for the week leading up. It’s always going to be a massive learning curve for me.

“I need to get my head around the players involved as well.

“It’s a big opportunity being inside the inner sanctum of the Western Bulldogs footy club.”

Neumann was delighted for the chance to improve his coaching skills at AFL level but said his aim was to use that knowledge to help strengthen women’s footy across the Darling Downs region.

“It’s great personally but if we can build on the comp we have here – which has doubled in size – it would be fantastic,” he said.

“We’ve definitely got the talent. Now it’s about giving them the right pathways moving forward.

Sheparding with Gary Ablett
2014 Indigenous Round