NAB AFL Under-18 Champs to kick off 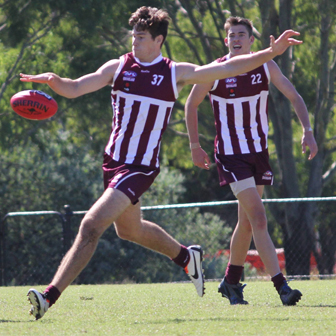 The 2013 NAB AFL Under-18 Championships commence tomorrow, Saturday, May 25 in Darwin.

The Northern Territory will play Vic Country at TIO Stadium at 6pm (CST) tomorrow while Queensland will met Vic Metro at Yeronga in Brisbane on Sunday May 26.

The championships will be played at 13 venues throughout the country over the next seven weeks.

SEN 1116 will broadcast from Etihad Stadium on Wednesday July 3 from 4pm-7pm.

Follow the NAB AFL Under-18 Championships online at www.afl.com.au/u18s featuring live updates from the games, with an insider’s perspective on the best players, interviews with coaches and recruiters, and extensive video highlights packages. Follow the Championships on Twitter:  @AFL_Under18s

Note – all times are local

** Matches to be broadcast live on FoxFooty

The NAB AFL Rising Stars Program provides recognition and a clearly identifiable direction for a player’s career, and comprises the following elements:

Allied Pickfords Cup round 5 preview
Winging it: Winning isn't everything