MORRISON BACK AS VULTURES SOAR 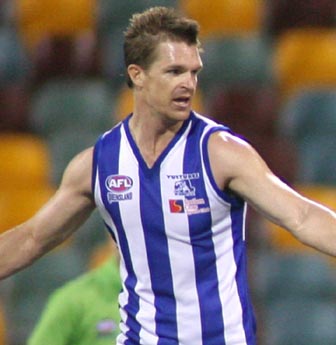 Key forward Shane Morrison returned from injury as Mt Gravatt cruised to win No.7 straight with what has now become a regulation 95-point disposal of the Western Magpies at Chelmer yesterday.

It was the sixth loss in a row by 80 points or more for the Mapgies and their 0-36 record since re-entering the State League must be a cause for some concern.

Mt Gravatt have finished the qualifying rounds with a healthy 12-6 record and host the NT Thunder in the elimination final next weekend, with the day and venue to be confirmed by QAFL operations manager Martin King tonight.

The Vultures began yesterday leisurely, trailing 2.2 to 3.3 at quarter-time.

The Magpies pushed two extra players into defence and the Vultures were lazy with their delivery forward, constantly kicking to a black and white jumper.

The Magpies were good with their counter attacks and at least one prediction pre-game that the Magpies would give a good account of themselves looked to be coming to fruition.

That all changed in the second quarter when Vultures coach David Lake demanded his players go man-on-man.

While it resulted in a crowded forward 50 metre arc, the Vultures’ superior ability came to the fore and they piled on eight goals to one.

“We played bad footy in that first quarter and didn’t get any return for our work,” Lake said. “The best decision we made was making sure everybody had a direct opponent in the second quarter.”

It was all one-way traffic from there.

Veteran Darryl White responded to lowering his colours at Southport last week with a lively performance, directing traffic around the forward line. He kicked 4.3 and set up six other goals.

Raw teenager Nathan Reid dominated at centre-half-back in the opening half and then contributed three goals as part of the forward rotation in the second in another eye-catching performance.

Midfielder Damien Steven continued in his rich vein of form, winning the ball at will all around the ground.

But it was Morrison’s return that was most significant, with the matchwinner kicking just the two goals but more importantly coming through unscathed.

Jake Furfaro continued his outstanding form, controlling the game from half-back, even though he spent all of the second term close to his own team’s goal as part of following a direct opponent.

For the Magpies, James Rozynski won plenty of ball but his disposal didn’t always find a target, while teenager Jackson Allen was more silky with his kicking and won his share of possession.

Ed McDonnell capped a fine individual season with another strong display in defence and the Magpies were happy with taggers Greg Lavey and Callum Carseldine, who took turns on trying to negate Josh Vearing.

Lake refuted suggestions the easy win was not an ideal build-up going into a final.

“It wasn’t that easy,” he declared. “We spent the whole day coaching and not looking at the scoreboard. We were surprised it added up to 95 points at the end.”