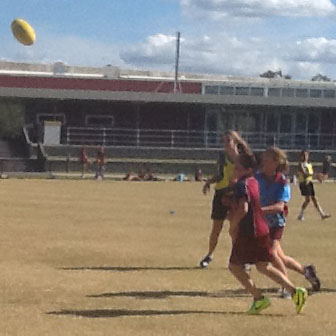 Partipants in the Caboolture District Primary Schools AFL competition have been lucky enough to play at the new Moreton Bay Central Sports Complex – AFL Precinct at Burpengary this season, enhancing the footy experience for the junior and senior teams involved.

Reynolds said that the old facilities at Caboolture did not compare to the new Moreton Bay Central Sport Complex in Burpengary.

“The new facility is an improvement by leaps and bounds, compared to the Caboolture Showgrounds. It is just outstanding,” he said.

There was been a lot of positive feedback during the competition and Reynolds has had students coming to him wanting to play club football.

Larger participant numbers are expected next year, in part due to the atmosphere that the new facility provides.

Reynolds said that the competition molds players into a team that can then be taken to the next level.

Last year a Caboolture Easts team played in the finals at the Gabba, an example of opportunities that the inter school competition offers.

Reynolds said that the increased involvement of junior girls in the competition is an indicator that female football is growing in popularity.

At Caboolture Easts SS senior and junior female teams have had the opportunity to train together. This provides further encouragement for the juniors who look up to the older girls.

“Yes, female footy is becoming bigger and bigger. At my school we get the junior and senior girls to train together once a week,” said Reynolds.

The competition wrapped up in mid May.