Monkey Magic for Mt Gravatt in 2017 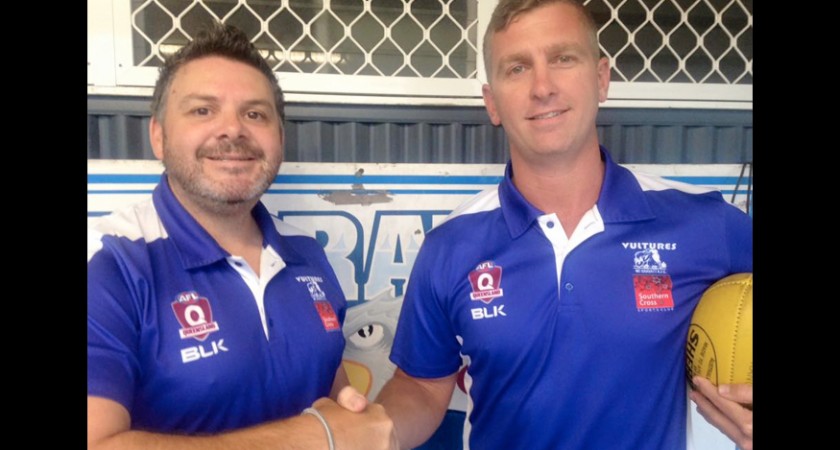 100-game player Troy “Monkey” Moncur will be swapping the boots for the board this year as Mt Gravatt’s senior coach.

After eight years coaching in country Victoria, Moncur returned home to play for the Vultures in 2016.

The 38-year-old played eight games in his final season before moving into the senior coach position vacated by Brad Pollock in December.

“It’s been a pretty easy transition, it was just more about whether I wanted to make that commitment to coaching again,” Moncur said.

“Once I did my knee in the offseason it ruled me out from playing so I thought I’d keep myself busy and do some coaching.”

Moncur comes into the role with an impressive coaching record.

His four years at the reins of Robinvale Football Netball Club yielded a remarkable four Grand Finals in a row, while his two years at Red Cliffs scored them one premiership.

Coaching the Vultures will be an even bigger challenge for Moncur, charged with the development of the younger prospects now at the club.

“Coaching eight years down in country Victoria, we just don’t have the kids and the academies down there, it’s more you recruit in to build a team and it’s more mature-age type guys,” Moncur said.

“But here, being in the city there’s heaps of young talent so that part’s an unknown but an exciting part because there’s a lot of reward from that.”

Moncur played his first game for the Vultures back in 2000; to put that in perspective, his loyalty extends back to the same year ‘Who Let the Dogs Out’ graced our airwaves for the first time and the fourth Harry Potter book was released.

He then went on to play in the Vulture’s 2002 premiership-winning side, followed by his appointment as the club’s co-captain in 2003.

Moncur played his 100th game for the club last year, which he says was a long time coming.

“It’s good in a sense that I can show the guys that this is my home club and it was really important for me, I wanted to play 100 games,” he added.

“My kids play there now and I’ve had some success with this club but I want to give the same opportunity to these guys.”

After the Vultures finished fourth last season, Moncur says his players know the areas they need to improve on.

“What I’ve seen with the games I played was that we just lacked some confidence and lacked some mature-age stronger toughness around the footy which is hopefully something we’ll add to our game plan this year,” he said.

“I think the boys have learned a lot from that and that’s one area we need to get better at is to build some resilience and a bit more toughness and not get pushed around so much.”

Back at training after the Christmas break, Moncur says everyone is refreshed and ready for their next challenge; to contest for the QAFL flag.

“We feel if we can just tweak a few things and get 10-15% improvement out of everyone, there’s no reason why we can’t really start to put our hand up amongst those other sides that are up the top at the pointy-end of the season,” he said.

“We obviously really want to play finals again but this time we won’t be running out naïve and hoping, we’ll have a strong plan and when we come off, we’ll know that we’ve given it our best shot.”