Mayne tigers lace up for charity 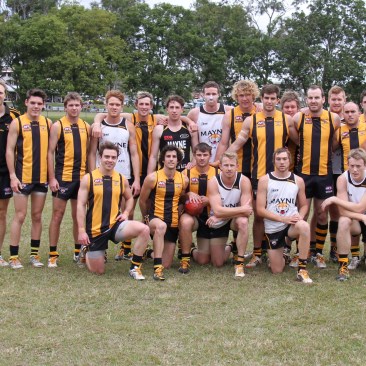 The Mayne Tigers got behind the “Lace up against Street Violence” campaign on the weekend, with both grades donning orange laces to raise awareness of the impact that street violence is having in the community.

The campaign, run by non-for-profit group Step Back Think, was formed in 2006 after Melbourne man, James Macready-Bryan, suffered irreversible brain damage after an assault on his 20th birthday.

The Lace up campaign provides an opportunity for individuals and clubs to help highlight the life-derailing consequences of a single punch.

Mayne coach, Mick Ferguson, introduced the prospect of supporting the campaign to his senior team during the week at training and expressed the importance of the initiative.

“Given the number of young players in our ranks, I believe we have a responsibility to ensure they act safely off the field,” Ferguson said.

“From a social perspective, it is important to teach the boys about behaving and acting responsibly so that they don’t end up in a violent situation.”

Club President, Russell Ditchburn, was only too pleased to get behind the initiative as it provided an opportunity to educate his players on the impact of violence in the community.

“Overall as a club we try to educate our players and how to treat each other as young men. This campaign is something that ticks both criteria,” Ditchburn said.

“I’ve got three boys myself and I would never want them in a situation like you hear of, so I think it’s important to support these causes and for clubs to get involved.”

More than 400 teams across Australia have worn the orange laces to take a stand against street violence and support Step Back Think’s campaign. $15,000 of prizes are up for grabs for striking a pose in the laces and submitting the picture to the Lace Up competition page.