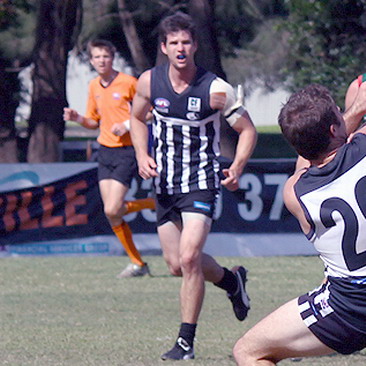 BURLEIGH coach Zane Doubleday has conceded finals football is probably out of reach for last year’s beaten preliminary finalists after the Bombers crashed to Western Magpies in a free-flowing affair at Chelmer Oval on Saturday.

Burleigh managed to top the 100-points mark yet still found themselves losers by 24.16 (160) to 17.16 (118), a result that leaves them still only four points out of the top five but with not much chance of getting there on current form.
“It’s probably curtains for us as far as a shot at the finals goes,” admitted Doubleday.
The Magpies stitched up the game with a blistering second quarter when they absolutely dominated the visitors, who were seven points down (5.8 to 5.1) at quarter-time.
“Our second quarter set us up,” said winning coach Peter McClellan after the Magpies kicked 10.4 to 3.3 for the term.
Burleigh’s stats of 2-8 in centre clearances and 2-2 at stoppages around the ground certainly back up McClellan’s observations of the determining quarter.
“They just blew us away,” said Doubleday of the term, although the killer blow was perhaps the 3.10 the Bombers kicked in the third quarter when they needed goals.
Away from a not-so-tight backline, McClellan was happy that his troops finally kicked more goals than behinds.
McClennan is working hard to get the Magpies’ conversion rate from inside-50 entries up to the 60 per cent mark.
“At the moment it is just below 50 per cent,” he said.
The Magpies unearthed a surprise packet in forward James Power, who kicked six goals.
Power has been in and out of the seniors side all season, but looks to have hit the right sort of form at the right time of the year because McClennan was clearly impressed.
“He’s a crumbing forward and is getting better each week,” said the Magpie head honcho.
“I was very impressed by his defensive workrate up forward and if he keeps doing like he did on Saturday he’ll hold his position because he gives us an extra option up there.”
Half-forward Brendon Morris chipped in with five goals, Peter Kilroy started in defence but did well when pushed forward, and pacey centre half-back Chris Hunt also shone with his run from defence.
Burleigh had Tom Sutherland as a focal point in attack, the big bloke kicking nine goals.
But ruckman Mick Van Rossum put in another tireless performance to get the nod as Burleigh’s best.
Young midfielder Jacob Howell, who continues to develop into a top-liner, also stood out for the visitors.