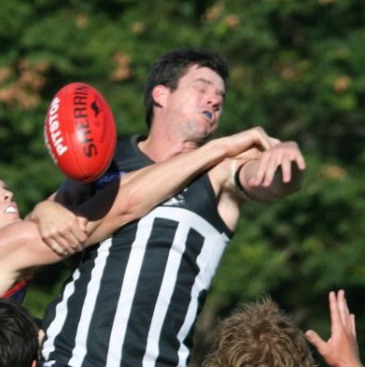 THE Western Magpies continue to search for a resolution to their poor conversion rate despite beating struggling Maroochy-Northshore by a big margin at Chelmer Oval on Saturday.

The Magpies took over outright second spot on the ladder from Wilston-Grange – losers to Sandgate on the weekend – after beating the Sunshine Coast club by 17.22 (124) to 7.7 (49).
Overall, coach Peter McClennan was happy with his side’s performance – that is away from dominant possession to satisfactory results on the scoreboard.
The Magpies had their now customary slow start, leading 2.8 to 2.1 at quarter-time but it was obvious, with so many scoring chances, things would get better.
They did, although McClennan admits he has plenty of homework to do to get the Magpies’ goalkicking on line.
“We’re working on our conversion ratio but that hasn’t happened yet,” said McClennan.
“In the second half our skills picked up but we had a lot of the footy again, so I have no issued with that.
“But it’s our disposal into the forward lines – and our forwards need to take marks as well.”
From seven points up at the first break, the Mgpies went into half-time 7.11 to 3.5 in front, then banged on 10.11 to 4.2 after that.
Experienced Tim McEvoy sparked the Magpies into action in the middle, getting his hands on the football and controlling play where it most matters.
Wingman Kyle Reid was also dominant and half-forward, Matt ‘Clock’ Thompson chipped in with four goals to be one of his side’s best.
Maroochy coach Roger Delaney was happy with what he thought was a brave effort from his players, away from the disappointing fourth quarter when the Roos failed to score.
“At quarter-time we had some hope, but the opposition was consistently good all day,” he said.
The Roos had ever-consistent Kane Tyson as their best on a wing, ahead of centreman Declan Magill and centre half-back Callum Lowe.