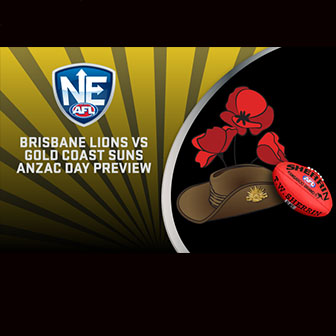 The NEAFL will replicate the biggest home and away clash of the AFL season with its own blockbuster on Thursday April 25. While Collingwood and Essendon lock horns at the MCG, there’ll be a State League stoush much further North, with Brisbane and Gold Coast’s reserves going toe to toe at Harrup Park in Mackay. Mackay is located on Queensland’s east coast, a little less than 1000 kilometres from Brisbane, with a population of 115,000. Rugby League is the traditional football code of choice in the city, with the Mackay Cutters featuring in the Queensland Cup competition, but Australian Rules is growing in popularity.

A healthy crowd is expected to watch the Lions and Suns, but the attendance will swell significantly if Simon Black is a confirmed starter. Black played a little more than 60% of his comeback game against Broadbeach last week, and it’s likely he, along with Brent Staker, will travel north to face the Suns. While Brisbane will be buoyed by the inclusion of its pair of big names, the Gold Coast could well be without a couple of their stars from last week’s routing of Redland. Tom Lynch, Danny Stanley, Trent McKenzie, and Kyal Horsley are all in line for a return to the senior side, after impressing in round five. Gold Coast Shaun Hart conceded he’d likely lose a few players, but he was upbeat about the prospect of the return of key personnel. “It’s great for those guys [Lynch, Stanley, McKenzie, Horsley] in that they played very well last week and they’ve put themselves in the mix for elevation,” Hart said. “Whoever gets selected in the seniors will be missed, but we should have some good players coming back this week. Tom Nicholls, Jeremey Taylor, and Leigh Osborne are all in the frame to come back.”

The clubs last clashed only a fortnight ago, when the Lions ran over the top of an injury-ravaged Suns to win by 110 points at Metricon Stadium in round four, but the Gold Coast bested Brisbane in two of the teams’ three match-ups in 2012.

Lions coach Leigh Harding’s enthused about the prospect of taking the Anzac Day fixture to a regional centre, and he’s adamant this game will be much tighter than the sides’ last encounter. “I haven’t been to Mackay, but I’m really looking forward to it, and I know the boys are too,” Harding said. “Travelling as a team is always an enjoyable exercise, and I’m sure we’ll be made to feel right at home by the locals. It should be a really good game as well- we’re expecting it to be a lot closer than our last match.”

With only five days to recover between games, both sides will forego their usual mid-week main training session, in favour of a light skills session when they arrive in Mackay on Wednesday. The football will get underway in the early afternoon on Anzac Day with the annual City vs. Country clash, before the Lions and Suns kick-off at 2:15pm.