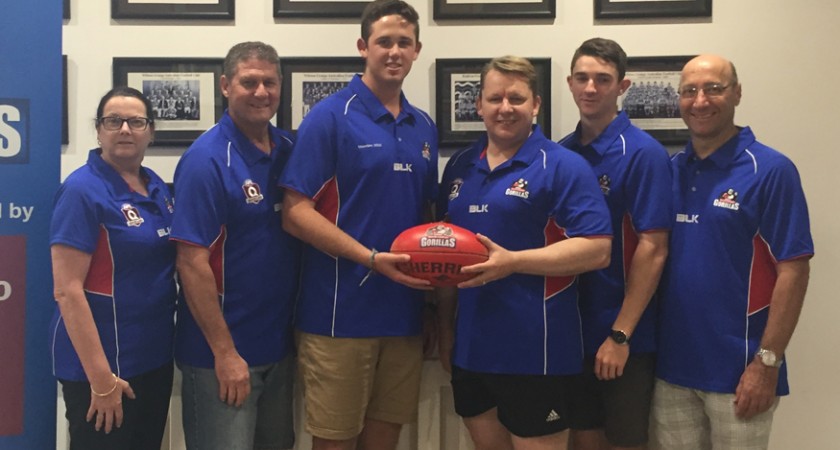 At just 20-years-old, Marcus MacDonald-Camden has put the boots into storage, and taken the leap into the senior coach ranks taking over as the Wilston Grange QWAFL coach for 2016.

For MacDonald-Camden, his coaching passion is fostered from his love of helping others develop.

“Coaching the boys over the past couple of years, plus back up north, I just love helping people. Helping people develop in the game is what really drove me into the position.”

MacDonald-Camden grew up in central Queensland, near Emerald, which was where his passion for helping others started.

“I just love teaching people the game. When I was up north I played every sport under the sun. Helping people out, helping with their skills, it just really interested me, and getting into coaching really helped me tick that box,” he said.

He first got involved with the Gorillas when running water for the team, and it certainly didn’t take long for him to feel at home.

“One of my school teachers I had back up north played for the club. We are pretty close family friends. I came down to watch her, started running water, slowly got more involved, met a good bunch of girls there and thought I would love to help these people out,” MacDonald-Camden said.

While the Gorillas only narrowly missed out on finals in 2015, reversing that result isn’t the sole focus of next year.

“My coaching style is definitely going to be about development. I’m not here to win a premiership in my first year, I’m here to try and continue to develop the club, their footy, and their techniques, so in a few years time we are in a position to look at that premiership,” he said.

“At this point in time I’m not worried about the win loss column. I’m not here to win a premiership straight off the bat. It’s about developing the girls and getting that game plan set in stone. Then we can look at 2017, 2018, and finals football.”

MacDonald-Camden isn’t going to be doing it alone this year. Alongside him for the ride in the coaching box will be outgoing senior coach Ron Kemp, Rod Podbury, Kieron Hyndman, Brad Pawlyszyn and Denise Kemp.

“Having the support around me is majorly important. Having this kind of position, you can’t just do it on your own, you definitely need people around you who you can trust and who you believe can help you with your coaching techniques,” MacDonald-Camden said.

“It’s great to have Ron hanging around. He’s been around the girls for five or six years now, so I’m stoked to have him around, being able to pick his brain on everything.”

The new coaching panel isn’t the only good news to come out of Hickey Park this off-season.

Bendigo Bank Oval is currently undergoing a $2 million refurbishment, including new female-friendly change amenities for players and umpires, a dedicated gym, player education rooms and community health rooms, an Australia-first LED oval lighting upgrade, a new playing oval surface, plus other minor upgrades including an electronic scoreboard and refurbishment of the Gorillas’ clubhouse.

Once complete, the upgrade will make Hickey Park a leading community football precinct nationally, supporting pathways for male and female players from Auskick to State Leagues.

Wilston Grange Junior Football Club will also be offering youth girl’s teams in the Under 11, 13, 15 and 17 competitions for 2016.

As for MacDonald-Camden, while he is firmly focused on his new role at the helm of the team, the long-term dream would see him at the elite level.

“Down the track I definitely want to go into coaching full time, whether that be male or female. I do want to pursue coaching down the track, say in the next five to ten years, but I’ve got to take it step by step.”