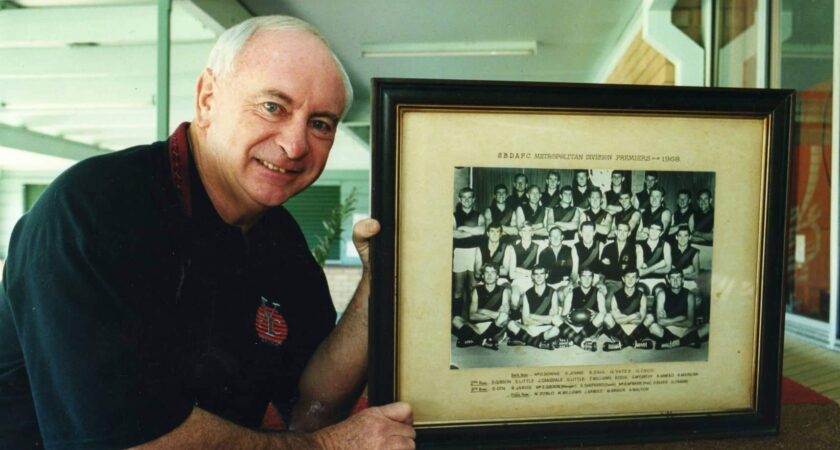 A lifetime love of Aussie Rules has seen Yeronga South Brisbane legend John Corless, receive a Medal of the Order of Australia (OAM) today for his service to community football in Queensland.

A champion of the Yeronga football community, Corless’ involvement with the Yeronga South Brisbane Football Club spans more than 60 years.

Head of AFL Queensland, Trish Squires, said it was fantastic to see Corless receive national recognition for his significant contribution to Queensland football.

“On behalf of everyone at the AFL, I’d like to congratulate John on receiving an OAM and thank him for his incredible commitment to the game,” she said.

“People like John are integral to the ongoing success of grassroots football.”

“From playing junior and senior footy at Yeronga, to working his way up to Presidency, he really has done it all!”

Corless was introduced to the club by his father Patrick, and Uncles Frank and Jack, as a junior.
As well as playing his junior and senior footy at the Devils, Corless participated in pre-season training with Carlton in the mid-1960s.

He captain-coached the Teachers’ Club for 11 years, finishing runner-up twice in the league medal.
He went on to be Club President from 1981 until 2006, a year which saw the Devils win their first senior grade flag, under son Tom as coach.

After handing over the presidency to another son Sam in 2007, Corless remained on the committee until 2013 in numerous different roles.

Corless was instrumental in the establishment of the Yeronga Junior Australian Football Club in the late 1980s.

He was inducted into the AFL Queensland Hall of Fame in 2014.