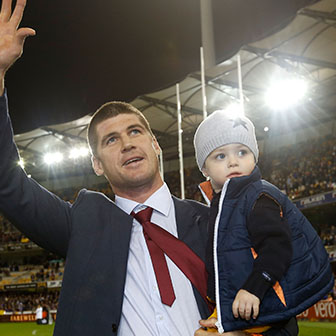 The Brisbane Lions today released the trailer for a six part documentary series taking fans behind the scenes of Jonathan Brown’s final year of AFL football.

“Browny – The People’s Champ” gives fans an insight into Brown as both a footballer and a person, providing unrivalled access to one of the game’s greatest players.

Lions TV were given exclusive access behind the scenes of Brown’s final season, capturing never before seen footage of the lead up to his final game and an intimate glimpse into Brown’s life as a father and husband.

The series features exclusive interviews with Brown, including behind the scenes vision of Brown’s retirement announcement.

From early morning beach sessions to precious time spent with the family, nothing is off limits, as Brown gives the football public a rare insight into the life of an AFL footballer.

Filmed over several months, “Browny – The People’s Champ” gives football fans a behind the scenes look into the life of one of the greatest players in the game’s history.

An open and honest Brown, shows why he is the ‘people’s champ,’ as he speaks candidly about the decision to go around again in 2014, how we would like to be remembered and the agonizing decision to walk away from the game he loves.

Part one and two of the six part series will be released tomorrow, with the remaining instalments to be rolled out twice daily on Thursday and Friday.

To view the trailer for “Browny – The People’s Champ” click here.