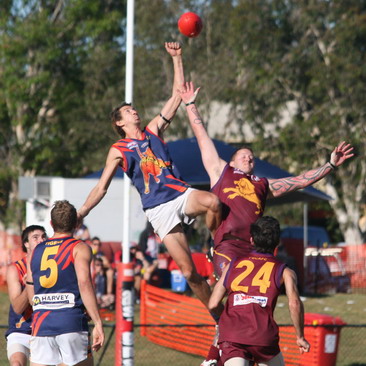 Played in blustery conditions both teams had plenty of the ball in the first term as they looked to gain the early ascendency. The Tigers kicked the opening goal and looked to have the measure of their counterparts with their defense on top led by the clever Owen Bailey.

Lions Full Forward Bryce Perry-Bolt who was playing his 2nd game back after a lengthy time out injured, tackled strongly against his opponent causing a turnover and a sub sequential shot on goal. He kicked a magnificent banana goal to lift his and his teams’ confidence.

Noosa went into the first break leading by 11 pts kicking 3 goals to 1 and being more efficient inside 50 when going forward.

PBC midfield group led by Jesse Derrick, Angus Munro and the Hard brothers Brad and Ryan gained control in the second term with their delivery and constant forward entry’s putting the Tigers under pressure. Perry-Bolt kicked a further 2 while the skilful David Manning and Matthew Carroll where busy.

Tigers’ livewire Travis Mills took a screamer inside 50 but elected to pass it only for the Lions defenders to swoop on it and clear it out.

In defense Bourke, Jackson Emblem and Jake Smart where holding firm for the Lions and held the Tigers goalless which saw PBC 5 goal term now lead 6.5.41 to Noosa 3.1.19

In an even third term no team could dominate with Noosa kicking a goal and the Lions contributing 2 goals to extend their lead by 27 points.

Noosa coach Wayne Fletcher rallied his troops at the last break asking for one last effort. He was happy how the Tigers held firm but knew it would take something special. He believed his players had that one last effort.

The Tigers responded well kicking 2 quick goals to bring the score back to 15 points. Tigers midfielder Nathan Winter won another centre clearance kicked it deep into the Tigers forward line where Mills snapped truly and Noosa where right back in it.

But like all good sides players are measured by how they respond when their backs are against the wall. Against the flow the Lions goaled to steady and then they finished the job with Perry-Bolt kicking 5 with a crook knee and Munro, Derrick and Brad Hards grabbing critical possessions.